Horse dies after falling on way to racetrack at Del Mar – fox5sandiego.com 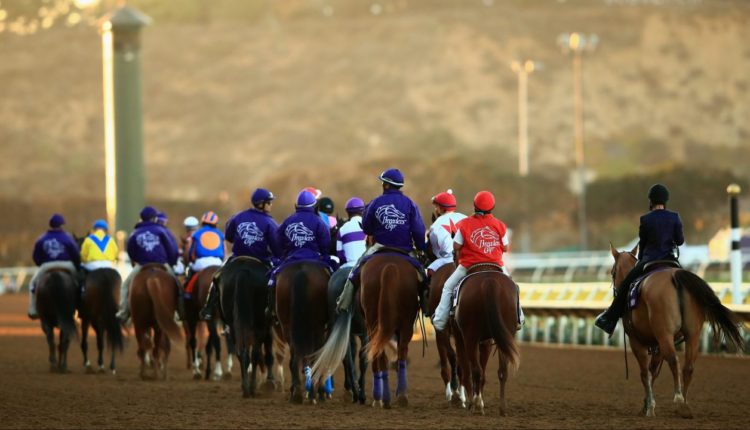 DEL MAR, Calif. (CNS) – A 2-year-old filly who had been flown in from Kentucky to run in the Sorrento Stakes died at the Del Mar Thoroughbred Club after flipping over backward while walking from the stable area to the receiving barn before the race, state horse racing officials confirmed Saturday.

Shesgotattitude “reared up and fell over while walking, requiring euthanasia,” Mike Marten, spokesman for the California Horse Racing Board, told City News Service.

The horse — who had one first-place finish in three career races — was scheduled to run in Friday’s seventh race. She was trained by John Ennis and owned by Ennis and Ken Donworth.

“Something like this just can’t be explained,” Del Mar CEO Joe Harper told the San Diego Union-Tribune. “Horses can be skittish and, unfortunately, that might have been the cause. We’re saddened by the loss of any horse, but something like this is especially tough to take.”

Shesgotattitude is the third racehorse to die from an injury suffered at Del Mar during the track’s current meet. Needless To Say, a 3-year-old filly, and Arson, a 2-year-old colt, both died while training on July 18.

Moreavino, a 5-year-old mare, was injured in Thursday’s fifth race and vanned off to undergo veterinary care. Del Mar officials did not immediately respond to a request for comment on her status Saturday, but the Union Tribune reported that she suffered a right front sesamoid fracture on the far turn of the 1-mile race. The newspaper said she had surgery Friday afternoon and track doctors were optimistic about her future.