Grand Slams and Cycles and Records, Oh My! Padres Open 2nd Half With Lopsided Win in D.C. – NBC San Diego 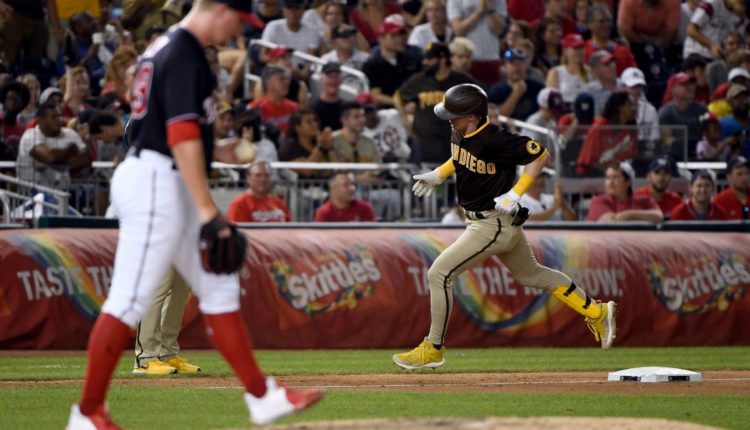 When Wil Myers hit a grand slam in the 2nd inning at Nationals Park in Washington, D.C. to put the Friars in front of the Nationals 10-3, it seemed like that would be the most memorable hit of the night.

Cronenworth hit for the 3rd cycle in Friars history, and the first outside the cavernous Coors Field, in a 24-8 demolition of the Nats on Friday night, setting a new franchise scoring record in the process.

The Padres scored runs in just about every way you can come up with in this game. In the first inning, Fernando Tatis Jr. stole 2nd base and went to 3rd when former San Diego catcher Rene Rivera’s throw sailed into centerfield. Tatis scored on a Manny Machado single, who scored on an Eric Hosmer single.

Then Hosmer took off for 2nd base, stopped in the baseline for the throw to come through, and watched as Tommy Pham scampered home for another run on the extremely rare double steal. The Padres swiped three bases in the first inning.

After that they decided to just hit the ball all over the National Mall.

After Juan Soto tied it with a 3-run homer off Chris Paddack the Padres got right back at it when Cronenworth started his historic night with a 2-run double to make it 5-3. Eric Hosmer drove in another run with a single then Myers stepped in with the bases loaded.

Y’all know what the Padres do with the bases loaded.

Myers ripped a salami into the left field seats. Since the start of the 2020 season the Padres have hit 13 grand slams. The next-highest total in baseball over that time is 10 by the Braves, so the Slam Diego nickname is absolutely fitting. The Padres scored seven times in the 2nd inning alone.

They weren’t even halfway done and Cronenworth was just warming up.

He tripled home Tatis in the 3rd inning and hit a solo homer to right in the 5th inning, leaving him just a single shy of the 332nd cycle in MLB history.

He’d have a chance to get it in the next inning because everyone in the lineup just kept hitting. Pham ripped a solo homer and Myers hit his 2nd bomb of the game, a 2-run shot that pumped the lead up to 16-4. Tatis singled home a pair, bringing up Cronenworth.

Jake decided to go ahead and get that cycle thing out of the way as quickly as he could.

He hit one off the end of the bat to the left side but since the Nats had a shift on, nobody could get there in time to make a play. Cycles are hard to come by, and Jake did it in just 5 innings.

Paddack was shaky but got through 5.0 innings allowing four runs. In the 6th Miguel Diaz didn’t look great, giving up another homer to Soto and a 3-run blast to Gerardo Parra that made it 19-8.

The Friars made it a cool 20 when Myers (the last Padre to hit for a cycle) drove in his 7th run of the night with a single in the 8th inning.

A week ago the Padres made one of the most improbably comebacks you’ll ever see against Washington at Petco Park, a night now known as “The Camarena Game.” The Nats would have no such historic comebacks.

Winning a game when you allow 20 runs is close to impossible. It’s only happened twice in history. Interestingly, both involved the Cubs and Phillies. In 1979 Philly beat Chicago 23-22, getting a bit of revenge for the Cubbies 26-23 win in 1922.

Just to be sure, the Padres got three more in the 8th inning on RBI singles by Brian O’Grady and Trent Grisham to make it a 23-8 game. In the 9th inning Jorge Mateo put the final tally on the board with a long solo homer, giving the Padres a run in every inning except the 7th.

The Padres get Blake Snell back from the 10-day Injured List on Saturday when they try to win the series in our nation’s capital.