From the Archives: Decades ago, Wally Funk hoped to be the first U.S. woman in space – The San Diego Union-Tribune 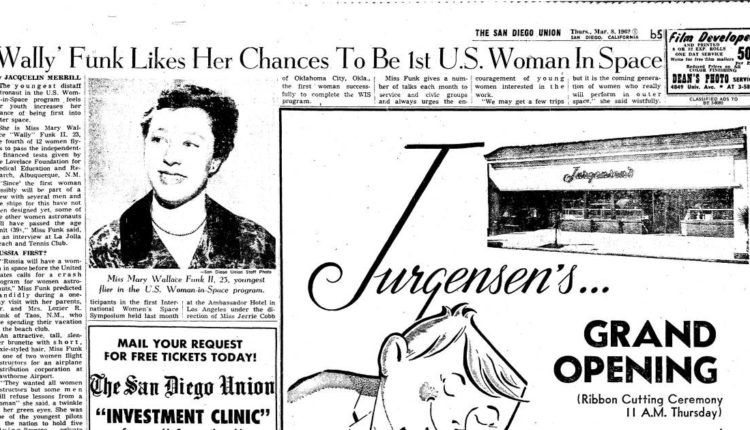 On Tuesday, Wally Funk, 82, finally made it into space on Blue Origin’s spaceflight alongside billionaire Jeff Bezos and two other people.

Almost six decades ago, Funk spoke to of The San Diego Union’s Jacquelin Merrill about her chances to be the first U.S. woman in space.

‘Wally’ Funk Likes Her Chances To Be 1st U.S. Woman In Space

The youngest distaff astronaut in the U.S. Women-in-Space program feels her youth increases her chance of being first into outer space.

She is Miss Mary Wallace “Wally” Funk II. 23, the fourth of 12 women flyers to pass the independently financed tests given by the Lovelace Foundation for Medical Education and Research, Albuquerque, N .M.

“Since the first woman possibly will be part of a crew with several men and the ships for this have not been designed yet, some of the other women astronauts will have passed the age limit (39),” Miss Funk said, in an interview at La Jolla Beach and Tennis Club.

Russia will have a woman in space before the United States calls for a crash program for women astronauts,” Miss Funk predicted candidly during a one-day visit with her parents, Mr. and Mrs. Lozier R. Funk of Taos, N.M., who are spending their vacation at the beach club.

An attractive, tall, slender brunette with short , pixie-styled hair. Miss Funk is one of two women flight instructors for an airplane distribution corporation at Hawthorne Airport.

“They wanted all women instructors but some men still refuse lessons from a woman” she said, a twinkle in her green eyes. She was one of the youngest pilots in the nation to hold five flying licenses—private pilot, commercial, single-engine, seaplane, and instructor ratings—and she has logged more than 3,000 hours in the air.

“A skiing accident got me into all this. Since I was a physical education major and this limited by physical activity. I took up flying.” This was in 1957 when she was a sophomore at Stephens College, Columbia, Mo., where she flew for its “Flying Suzies.”

Then she went to Oklahoma State University where she was named the nation’s foremost female pilot in 1959 and 1960 by the 99ers, an international organization of women flyers, after national intercollegiate air meets in which she performed with the OSU ”Flying Aggies.”

Although she majored in secondary education and minored in aviation education she earned more college credits in her “minor” and on graduation she became the first civilian flight instructor for the private Red Leg Flying Club at Fort Sill, a U.S. Army post near Lawton. Okla., a job she held until she came to California last October.

She volunteered to undergo the series of rigid mental and physical endurance and high altitude tests at the Lovelace Clinic -the same tests given the seven Mercury astronauts, on Feb. 29, 1961.

One week later, at 22, she had successfully passed every examination. Last summer she completed phase two-four days of isolation and psychological testing at Oklahoma Veterans Administration Hospital, Oklahoma City. It is a lot of work, but very worthwhile,” she said enthusiastically. “I encourage interested young women still in school to prepare for it by taking as much science and doing as much physical activity as possible.” She was one of the participants in the first International women’s Space Symposium held last month at the Ambassador Hotel in Los Aneles under the direction of Miss Jerrie Cobb of Oklahoma City, Okla., the first woman successfully to complete the WIS program.

Miss Funk gives a number of talks each month to service and civic groups and always urges the encouragement of young women interested in the work.

“We may get a few trips but it is the coming generation of women who really will perform in outer space,” she said wistfully.