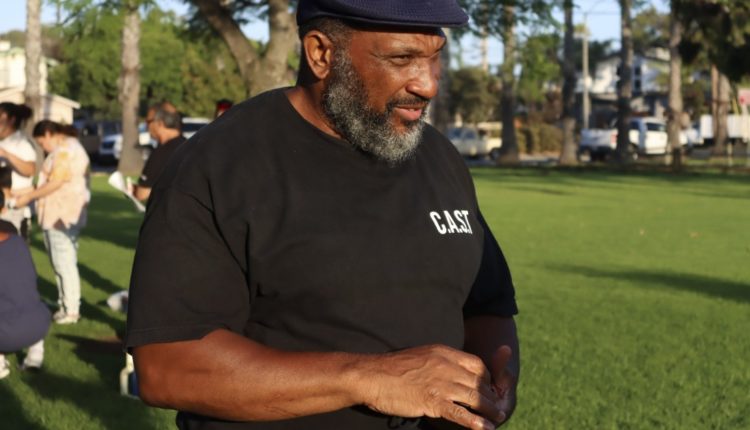 When a 25-year-old man was gunned down in Linda Vista in late June, a network of community groups mobilized. It’s what they do when violence strikes San Diego’s neighborhoods.

Some of the groups condemn the violence and discourage retaliatory gang shootings. Some offer support to victims or, in cases of homicides, victims’ families.

The work of the groups — which include the Community Violence Response Team, Community Assistance Support Team and San Diego Compassion Project — has picked up as San Diego grapples with an uptick in homicides and shootings in the first half of the year, particularly gang-related shootings.

This story is for subscribers

We offer subscribers exclusive access to our best journalism.
Thank you for your support.

“It was heartbreaking to see them cry for (Amador),” she said.

In the days that followed, Bravo, who works with the Union of Pan Asian Communities’ Community Violence Response Team, helped the family make funeral and burial arrangements.

And Bishop Cornelius Bowser, pastor of Charity Apostolic Church and a member of the Community Assistance Support Team, or CAST, organized a vigil as a way to provide Amador’s family and friends a space to grieve, honor Amador and denounce the shooting.

Bowser’s efforts focus on stopping gang violence. A former gang member, Bowser works with others who, like him, left behind gang life. Central to CAST’s work is meeting with gang members in the aftermath of a shooting to persuade them not to retaliate. Sometimes the group’s members show up to a hospital to talk to people who have been wounded in gang-related incidents. Other times they sit down with respected gangs members who have influence with other gang members, Bowser said.

It’s worked in the past. “Peacemakers” — as Bowser and others call former gang members involved in peace talks — have gotten gangs in southeastern San Diego to walk away from gang wars in recent years, Bowser said.

Bowser and other CAST members say they take advantage of every opportunity — during a hospital visit or a vigil — to connect victims to resources, such as shelter, financial assistance for wage loss and employment assistance. CAST members hope to get them to turn their lives around. And they try to stay in touch with victims.

“Sometimes gang members say they don’t want to die and get shot anymore and want to change,” Bowser said.

Trust is the key.

“When you win their trust, you’ve got them. They will open up to you,” he said. “And once they heal, they’ll even help you keep the peace, because they know what we did for them.”

Gunfire, of course, doesn’t always spare its victims. Groups like the Community Violence Response Team and San Diego Compassion Project step in to help victims’ families pick up the pieces. They often help families with funeral and burial arrangements.

“For many, they’ve never had to figure out a funeral for themselves,” Bravo said.

Bravo knows the steps all too well. Her son, Jaime Bravo Jr., was stabbed and killed outside a friend’s apartment in City Heights on May 18, 2012.

She sometimes links up with faith leaders like Pastor Jesus Sandoval of New Harvest Christian Fellowship of East San Diego. Sandoval, executive director of the city’s Commission on Gang Prevention and Intervention and a former gang member, opens the doors to his church for services at no cost to victims’ families.

The groups also connect families with the Victim Assistance Program ran by the San Diego County District Attorney’s Office. The program helps families apply for state funds to cover up to $7,500 in funeral and burial expenses. Victim advocates with the program, like some of the community groups, also accompany families to court hearings to offer support.

Linda Peña, director of the program, said community groups contact her once or twice a week on average.

“They’re right there on the ground” and often relay valuable information, such as the needs of the families, Peña said. “We really do rely on the information they provide.”

For more than a year, many funeral homes and cemeteries limited capacity because of the COVID-19 pandemic, keeping the community groups from joining victims’ families during services, Bravo said.

For Bowser, the pandemic made it difficult to engage in face-to-face interactions to prevent violence. He said restrictions on hospital visitations prevented outreach efforts in hospital rooms.

“I felt powerless and it bothered me,” Bowser said.

The recent vigil for Amador on July 19 was the first Bowser had organized since before the pandemic.

How the community groups are dispatched varies. Often, residents will contact them when gunfire erupts in their neighborhoods. Some groups, like Bravo’s team, also rely on San Diego police contacts.

Bowser once did, too. He said police used to notify him of gang-related shootings, but the communication slowed and then stopped in recent years. Bowser said he believes the department cut off communication because of critical comments he made about law enforcement.

The change, Bowser said, has hampered his ability to respond to gun violence.

Tasha Williamson, of the San Diego Compassion Project, said she, too, lost communication with police after she began protesting what she described as “corruption” in law enforcement. Williamson has become one of the fiercest critics of the Police Department and has organized several protests in recent years.

“It became where it was no longer about the victims; it was about the feelings of law enforcement,” she said.

The San Diego Police Department said it values anti-violence community programs and that it offered $250,000 from its budget for the fiscal year that began in July for a new program that’s in the works, in collaboration with CAST. The No Shots Fired program is expected to connect gang members with resources and provide them avenues to leave behind the gang life.

“The San Diego Police Department is committed to keeping the community safe,” Lt. Adam Sharki, a police spokesman, said in a statement.

On a recent Thursday afternoon, San Diego police officers, Bravo and other community members fanned out at an intersection in Mount Hope, not far from where a 56-year-old man was shot and run over by a car weeks earlier. In small groups, they walked around the neighborhood, listening to residents’ concerns and handing out fliers with information about various resources.

A woman who walked out of a home on the corner of Hilltop Drive and 41st Street was asked what she considers the biggest concern for residents in the neighborhood.

Bevelyn Bravo, center, speaks during a meet-up between police and community members on July 15.

Several residents said they can’t tell if the bangs they sometimes hear when the sun goes down are gunshots or fireworks. Several residents allowed a minister to pray for them and their neighborhood.

“If folks really, really wanted to end violence, we would have deeper discussions and we would push resources (into disadvantaged communities) to end poverty,” Williamson said.

She said funding for law enforcement should not overwhelmingly make up the “public safety” budgets of cities and counties. She said public safety funding should also cover resources such as mental health services.

“Law enforcement cannot change violence on its own,” she said.

On a recent Monday night, Williamson and Bravo stood on the sidelines at Chicano Park as officers in riot gear tried to disperse a crowd moments after an attack that gravely injured an 18-year-old man. Williamson and Bravo connected with loved ones at the scene and learned which hospital Danilo Gudiel had been taken to. They were waiting outside the hospital when Gudiel’s family walked out in tears. Gudiel had died.

“(Gudiel’s) mom couldn’t believe it,” Bravo said. “She’s distraught. She’s crying. She’s asking me why — why something like this would happen to her son.

“You have no answers for that. There’s no good answer.”

“I shared that my son was murdered, too, and that I would be there for her,” she said.