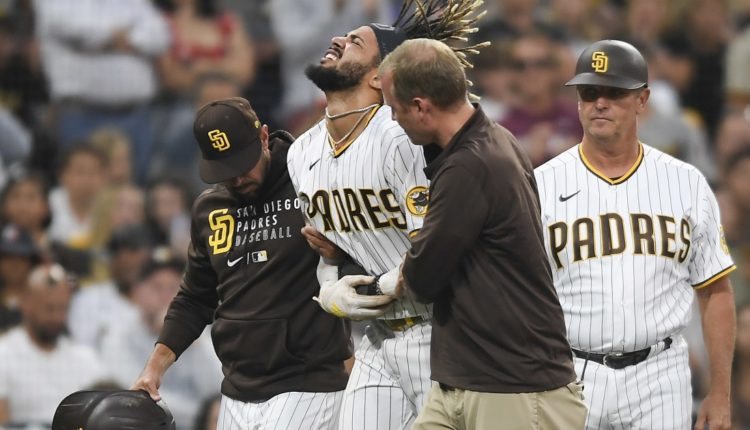 Friday’s trade deadline passed without the Padres adding an arm for their playoff push.

Now the arm — more specifically the left shoulder — of their best player is again in question.

Fernando Tatis Jr. was helped off the field Friday evening after attempting advance to third base on a hard-hit ball in the bottom of the first inning. He slid feet-first to attempt, unsuccessfully, to avoid the tag from shortstop Brendan Rodgers, slammed his left shoulder on the dirt and crumbled over in obvious pain in foul territory.

Tatis exited the game moments later, escorted by Padres manager Jayce Tingler and a trainer who appeared to be holding his left shoulder in place.

Tatis spent 10 days on the injured list in April with a partially dislocated left shoulder.

The Padres’ 22-year-old shortstop reaggravated the injury while diving for a ball on June 19, missed one game and returned to the lineup to start 19 straight games heading into the All-Star break, where he represented the Padres’ as the NL’s starting shortstop.

Ha-seong Kim replaced Tatis at shortstop in a game the Padres trailed 9-0 in the fifth inning as rookie left-hander Ryan Weathers allowed a career-high three homers, beginning with a first-inning grand slam to continue a challenging news cycle.

In their push to add a starting pitcher for their playoff push, the Padres did not land Max Scherzer, Jose Berrios, Kenta Maeda or even the Rockies’ Jon Gray before Friday’s trade deadline passed.

Then Weathers issued a two-out walk in the first inning, a double to Charlie Blackmon and another walk to Elias Diaz before Ryan McMahon’s grand slam to left-center opened a 4-0 lead.

Tatis singled with one out a half-inning later and was looking to take an extra base after McMahon couldn’t quite handle Manny Machado’s hard-hit grounder to third.

But McMahon collected the loose ball and led a throw to Rodgers as he was racing Tatis to third base.

The tag was applied as Tatis attempted to steer his feet-first slide away from the Rockies shortstop.

Connor Joe and Brendan Rodgers each hit two-run homers in the fourth inning off Weathers, who struck out two and allowed eight runs on eight hits and three walks in four innings.

Elias Diaz added a solo home off Nabil Crismatt to open the fifth.