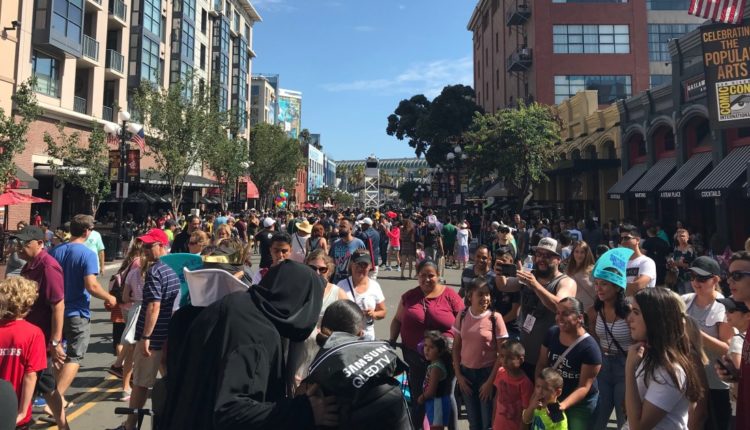 SAN DIEGO (KGTV) — Much like last year, Comic-Con is virtual in 2021. But those in San Diego have made it their mission to not only keep the celebrations alive, but support businesses that once benefited from the heavy foot traffic this event brought in.

Unlike years past, there are not many out-of-towners taking part in the cosplay festivities in the Gaslamp Quarter. But those in San Diego who consider this a yearly tradition hope to fill in the gap by helping nearby businesses in any way they can.

Christopher Canole, better known as Dude Vader, has been a part of the mega-event since its inception.

“This is our Fourth of July,” he shares, “this is our celebration, we are back, San Diego is back!”

Comic-Con is online this year. but San Diego superfans have decided to bring the joy of cosplay to a corner near Tinfish restaurant. The handmade shrine has been the meeting ground for those in “America’s Finest City” to meet and greet in person, similar to what they would do during other years.

For the Paredes-Rivas family, they wanted to spend this weekend supporting their city, “We decided to rent a room here at the Hard Rock, and we did this yesterday,” shares Margaret Paredes-Rivas, “We just wanted to support the local restaurants and businesses that normally benefit from Comic-con.”

This smaller crowd knows that their favorite hot spots are still rebounding from not only the pandemic, but event weekends like this one that once used to bring in foot traffic from near and far.

Paredes-Rivas shares that her family tradition of attending Comic-Con started in 1998. Over the past two years, she says it’s been difficult to see her city impacted by closures of events and venues.

“They are appreciating the people that are coming down here and supporting them,” shares Paredes-Rivas of the Gaslamp Quarter businesses, “This morning we had breakfast at Mary Janes and they were talking about how they miss Comic-Con. They were having people out of state asking why people are dressed up, and they said it was supposed to be Comic-Con weekend, but they are still having people come out to support us.”

And those from out of town who did not know Comic-Con was taking place in a different way, have been quick to take part and invest in the local fanfare.

Rita Turner is from Seattle, Washington, and came with her friends to travel the city. She was under the impression Comic-Con was canceled altogether.

She says when she walked out of her apartment to see everyone dressed in costume, her group immediately was drawn in, “Being able to help them rebuild their community that’s what it’s all about.”

In their costumes and characters, cosplayers want others to know that Comic-Con is is still here, and so is San Diego.

“Coronavirus was tough,” shares Canole, “but all these cosplayers were still making outfits, and they are ready.”

While this weekend’s event is virtual, Comic-Con is hoping to have a smaller in-person activity this Thanksgiving, called “Comic-Con Special Edition.” Organizers say the traditional in-person Comic-Con will be back next year.