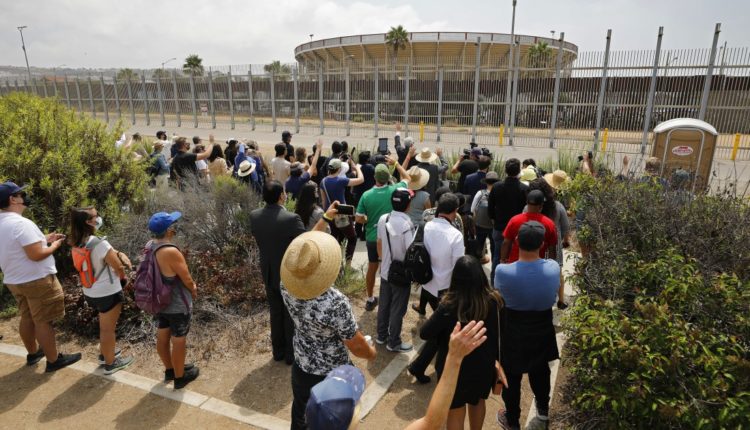 Fifty years ago, when then First Lady Pat Nixon opened what she envisioned as an international friendship park at the border, she ordered a section of the barbed wire fence that divided the countries be cut so she could walk across to greet the people in Mexico.

On Sunday, during a binational event to commemorate the 50th anniversary of Friendship Park, there were also greetings to the neighbors south of the border— but this time from a distance.

Elected officials and members of the community gathered on both sides of the border to honor park’s original vision as a symbol of friendship between the two countries.

The access gate to the part of the park where families separated by immigration status usually gather remained closed on Sunday, so attendees on the U.S. side could not approach the primary border fence as has been done in previous events.

From a distance, with the support of loudspeakers, elected leaders exchanged messages of friendship across two fences.

“San Diego’s relationship with our sister city of Tijuana is a critical part of who we are,” San Diego Mayor Todd Gloria said.

“This park symbolizes that truth and that identity and although there is a border that separates us, we are one binational mega-region who welcomes each other with open arms and we should do it with open doors.”

Imperial Beach Mayor Serge Dedina recalled the simpler times when he used to visit the park and its surroundings without restrictions.

Dedina shared that, one time when he was a teenager, he and his friends threw their bicycles over what he described as “only a cable” that divided the two countries so they could go buy chicharrones and cruise around Playas de Tijuana.

“It was never designed to be this giant barrier; it was designed to be something that we can work together, and our border works better when we have bridges of understanding versus walls that are closed,” added Dedina, when asked about current restrictions.

A celebration was held for the 50th Anniversary of Friendship Park at Border Field State Park on Sunday, August 22, 2021 in San Diego, CA. The park is currently closed.

While Border Field State Park reopened back in May after being closed for over a year due to the pandemic, Friendship Park did not.

The U.S. Border Patrol, which grants access to Friendship Park, said last week that because of the influx of migrants on the southern border, they could not properly staff the park.

“Adding to the complexity of our border security operations, we are still mitigating the spread of COVID and its variants. At this time, there are no plans to reopen Friendship Circle until it is operationally feasible, and we can do it safely and securely,” a Border Patrol spokesman said in a statement.

Other officials in attendance on at the U.S. side were Assemblymembers Lorena González, Chris Ward and Akilah Weber, as well as county Supervisor Nathan Fletcher and the Consul General of Mexico in San Diego, Carlos González Gutiérrez.

On the Mexican side, the Secretary of Economic Development of Tijuana, Gabriel Camarena delivered a message, and later a children’s choir joined the celebration singing the song “Stand by Me”.

Valentina Potrillo Ruiz, daughter of Tijuana Mayor Karla Ruiz, planted a tree on the Mexican side of the binational garden, located next to Friendship Park.

Pedro Ríos, local director of the American Friends Service Committee, said that it is important that both elected leaders and the community continue to fight for the full reopening of the park, so that families can reunite again.

For some families, this is the only place where they can gather and talk even if separated by the border fence.