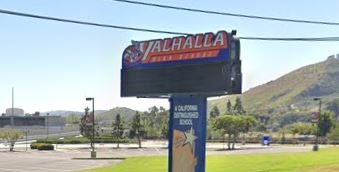 A campus supervisor at Valhalla High School in El Cajon is on paid administrative leave while the Grossmont Union High School District investigates his role in breaking up a fight between two students on Tuesday.

The fight involved two students during lunch hour, according to the district. In a statement, the district acknowledged pictures video of the altercation were circulating on social media.

“The incident drew the attention of a number of surrounding students and required additional law enforcement support to calm the situation,” GUHSD Superintendent Theresa Kemper said in a video message directed to the Valhalla High community.

Kemper said the district would not comment on specifics of an ongoing investigation, but vowed to be transparent with the district’s findings.

“Some students and staff are still feeling the effects of what happened on Tuesday, in light of the events that have taken place in America over the last two years, it’s completely understandable that students and members of our school community are upset,” Kemper said.

Valhalla High is in the city of El Cajon in San Diego County.