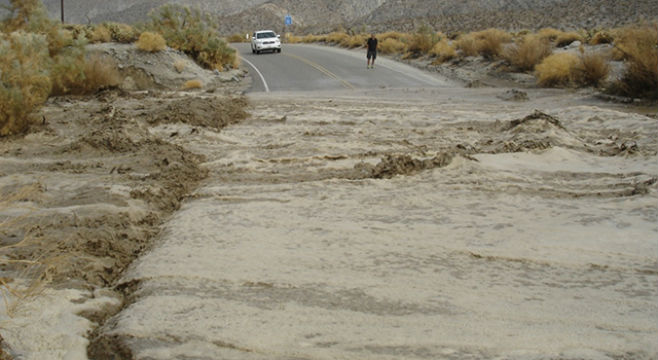 A flash flood washes over Route 78 in San Diego County in this file photo.

The National Weather Service issued a flash flood watch Sunday from noon to 7 p.m. for the San Diego County mountains.

Monsoonal moisture and daytime heat was predicted to increase the potential for strong thunderstorm development over the mountains Sunday afternoon, the weather service said.

A weak inverted trough brought widespread showers and a few thunderstorms overnight across the region. That trough moved on to the northwest and carried most of the showers with it, forecasters said.

There were 95 strikes in San Diego County, and 97 in Riverside County.

Most of the rain fell in a swath from the northern Coachella Valley, southwest across Riverside and into northwest San Diego County.

Thunderstorms were expected over the mountains again Monday, decreasing into midweek, before increasing again later in the week as a monsoonal flow prevails around strong high pressure over the Rocky Mountains.

Mild nights and seasonally warm to hot days were expected all week, along with higher humidity.