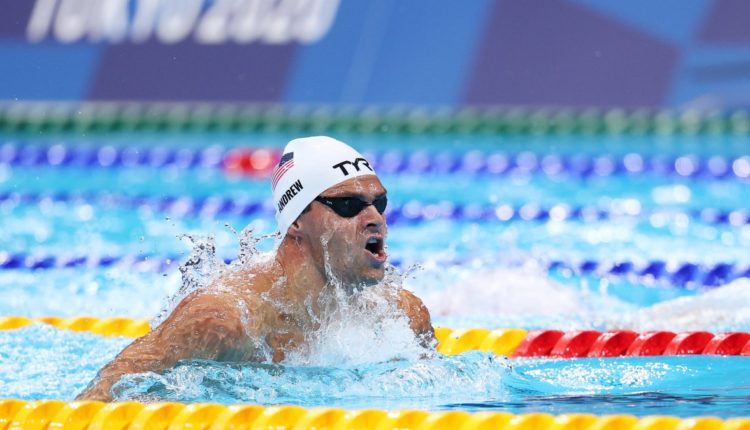 The family of Encinitas-based Olympic swimmer Michael Andrew will hold a watch party Thursday to root for the swim star from afar – like so many families of Tokyo Olympic athletes have had to do in this pandemic-era edition of the games.

The Olympics are back! Sign up for our Olympics newsletter to get the latest news from the Tokyo games in your inbox.

Andrew’s mom, sister and other loved ones have planned a watch party at 6:30 p.m. Thursday at Daybreak Church on Ambrosia Lane in Carlsbad in San Diego’s North County. Anyone who wants to support Andrew is welcome.

Together – but apart from Andrew – the group will watch him take his lane in the final session of the men’s 200m IM. Earlier this week, Andrew posted the fastest time in the men’s 200m IM qualifying race – 1:56:40. That moment was epic, and you can relive it here or below.

On Thursday night though, Andrew has his chance at gold, along with other Team USA swimmers expected to dominate the podium like Lilly King and Ryan Murphy.

You can watch the swimming events – including Andrew in the 200m IM finals – on NBC’s Primetime coverage at 6:30 p.m. PT on Thursday, July 29 (San Diego time; it’ll be July 30 in Tokyo). You can also stream it live here or with the link below.

Andrew, 22, is a resident of Encinitas who loves to surf those north San Diego County breaks. He was born in Minnesota, grew up in South Dakota and Kansas, and settled in Encinitas in 2018.

The Tokyo Olympics are his first Olympics; though he came close to competing in Rio 2016.

Some other fun facts about the swimmer:

NBC 7’s Steven Luke caught up with Andrew in Encinitas before they both made their way to the Tokyo Olympics and the swimmer said his biggest supporters are his family.

“Dad’s my coach, mom’s my agent, my sister is my biggest supporter,” he told NBC 7. “We’re always surfing together hanging out and I wouldn’t be here if it wasn’t for the family unit that we are.”

It’s that unit that will cheer him on tonight as he lights up his lane at the Tokyo Olympics.

Swimmer Michael Andrew grew up in Lawrence, Kansas, before his family relocated to California. This first-time Olympian talks about how his family and upbringing shaped him into the athlete he is today.