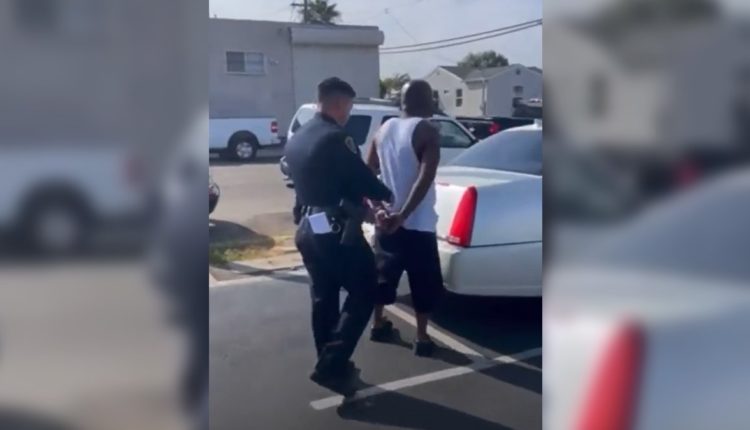 The San Diego Police Department is reviewing the conduct of a group of officers involved in a traffic stop in San Diego’s Southcrest neighborhood on Sunday after video of the incident surfaced online, the department confirmed.

An officer stopped 38-year-old Columbus White, who is Black, at around 9:15 a.m. on Vesta Street near Acacia Street, according to SDPD.

From what can be seen in a two-minute video captured by White and a bystander, the officer told White he was stopped because he is a “Fourth Waiver.”

Fourth Waiver is a policy that allows those on probation to waive their Fourth Amendment rights, which generally protect people from unwarranted searches and seizures. The waiver is a voluntary option taken by offenders as a condition of parole, probation or law enforcement supervision, according to the San Diego County Probation Department.

In the video, White is heard asking the officer why he is being pulled over. The officer replies he has probable cause due to Fourth Waiver. White denies he’s waived his Fourth Amendment rights and claims he is not on parole or probation. He then asks the officer to call a supervisor.

NBC 7 does not know what happened before the video was taken.

“He didn’t want my license, registration. He started off by saying my name. He gave out my name saying I’m a Fourth Waiver. I felt I needed my phone for protection and the officer showed, I’m not doing anything, so why are you doing something to me? That’s why I needed my phone,” White told NBC 7.

An SDPD lieutenant confirmed the footage of the incident taken by White and shared in this Twitter post by San Diego activist Bishop Cornelius Bowser.

Bowser said he shared the video to show why reform is needed when it comes to what is allowed by officers during a traffic stop.

“What happened to Columbus is what we say happened in our community numerous times, and that’s part of the problem,” Bowser said. “They’ll find anything to give you once they stop and justify.”

The recording stops and starts again with the bystander’s video as White is placed in handcuffs. The officer is heard telling the driver he is being detained, not arrested.

Sirens are then heard quickly approaching and at least two other officers in separate police vehicles arrive at the scene. One officer walks up to the first responding officer, the third pulls to a quick halt, leaves the car and approaches the bystander.

“Back up right now,” the officer tells the man.

“Yes you do. You get away from my officers, that’s what you’re going to do,” the officer says before he reaches at the man behind the camera.

The shaky video then appears to show a scuffle between the officer and the bystander. The camera points away from what is happening but yelling can be heard in the background.

What happens after the video shuts off is unknown.

After the video surfaced a day after the incident, a complaint was received by the department’s Internal Affairs Unit and an investigation was launched, SDPD said.

“A thorough review will be conducted to determine if any policy violations occurred. At the conclusion of the investigation, it will be turned over to the Commission on Police Practices for their review and analysis,” SDPD said.

SDPD has not released any other details about the traffic stop or their ongoing investigation.

Once SDPD’s internal investigation is completed, it will be reviewed by the Commission on Police Practices, an independent police oversight commission created to review complaints made by the public against SDPD officers.

When Bowser was asked what he thinks of the police investigation, he responded, “That can help, yes, but what are they going to do about it? That’s the whole question.”