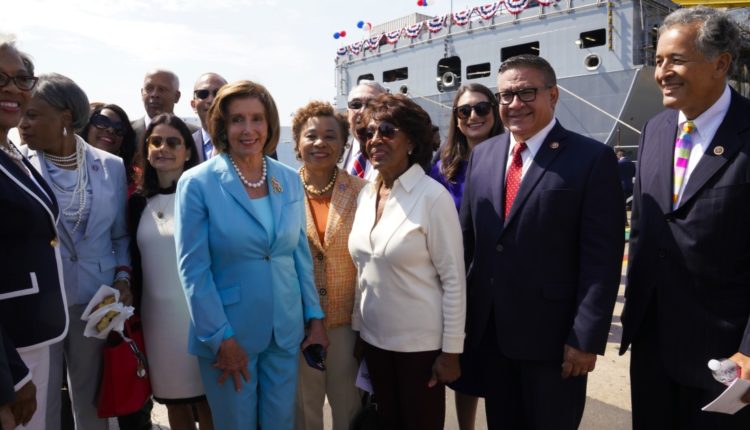 John Lewis, who found peaceful and powerful ways to fight racism as a civil rights activist and to advocate for the poor and disenfranchised as a congressman, was lionized by loved ones and lawmakers Saturday at a San Diego shipyard, where a huge Navy supply vessel was christened in his name.

More than 30 current and former members of Congress, including House Speaker Nancy Pelosi, joined military leaders and Lewis’ family for the ceremony at General Dynamics-NASCCO, which was held one year to the day after the Georgia Democrat died of pancreatic cancer at the age of 80.

The ship’s sponsor, actor-activist Alfre Woodard Spencer, joyfully smashed a bottle of Champagne against the hull of the 742-foot long ship, in a christening ritual that dates back centuries in the U.S. and thousands of years worldwide.

Lewis “lives in the unalterable truths he spoke to power,” Woodard Spencer told the roughly 100 people in the invitation-only audience. “He lives in all the spaces where people reach out their hands to welcome, to protect, to feed, to vote, to encourage — in all those places where people say, ‘Amen.’”

Pelosi and Woodard Spencer praised NASSCO’s workmanship on the ship, John Lewis, which is the first in a new class of Navy oiler vessels. The shipyard is building the first six Lewis-class oilers under a $3 billion contract. The Navy says it may need as many as 20 of the vessels.

“This ship will be a beacon to the world, reminding all who see it of the persistence and courage of John Lewis,” Pelosi said.

The vessel was given its name five years ago by Ray Mabus, who was secretary of the Navy under President Barack Obama. Mabus said at the time that he would name the first of the new oilers after civil rights leaders.

The names include gay rights activist Harvey Milk, a member of the San Francisco Board of Supervisors who was shot to death in 1978 by a former board member. NASSCO will launch the Harvey Milk in November. Mabus also named oilers after Lucy Stone and Sojourner Truth, who fought against slavery and for women’s rights.

The Navy oiler John Lewis was christened Saturday at the General Dynamics-NASSCO shipyard in San Diego.

Mabus, who attended Saturday’s ceremony, received some criticism from departing with the tradition of naming such ships after military heroes.

“But I think you have to represent all the values that we hold as Americans, that we hold as a country. And so that’s why I’ve named ships the Medgar Evers, Cesar Chavez, John Lewis, the Harvey Milk. Because these are American heroes, too, just in a different arena.”

The Navy has yet to announce where the John Lewis will be homeported.

Lewis’ life is a widely-told story that began on Feb. 21, 1940, when he was born outside of Troy, Ala., the son of sharecroppers.

As historians note, his family did not want him to grow up to be deeply involved in fighting segregation, fearing for his safety. There was particular concern about the violence that came with opposing “Jim Crow” laws, statutes that legalized segregation in parts of the U.S.

Lewis did not follow his parent’s advice. He was captivated by the ideas and work of emerging civil rights leaders, notably the Rev. Martin Luther King Jr. Lewis became one of the founding members of the Freedom Riders, an integrated group that encountered violent opposition in 1961 when it staged bus rides in the South to protest segregation at bus terminals.

Lewis adhered to his commitment to non-violence and helped bring international attention to the civil rights movement, which in turn helped lead Congress to approve the Civil Rights Act in 1964. The landmark law prohibited discrimination on the basis of race, color, religion, sex or national origin. The bill also helped lead to the passage of the Voting Rights Act of 1965 — elements of which are today being challenged today.

Lewis also is remembered for being one of the “Big Six” leaders who organized the March on Washington, a 1963 civil rights protest that culminated with a rally in the U.S. capital that drew more than 250,000 people.

And in 1965 Lewis and other protestors were beaten and injured by state troopers while trying to carry out a peaceful voting rights march across the Edmund Pettus Bridge in Selma, Ala. The incident — known as “Bloody Sunday — was broadcast nationwide on TV and shocked the sensibilities of many Americans.

Lewis later moved to Georgia, where he was elected to Congress in 1986, starting a long career as a lawmaker.

In this Feb. 15, 2011, file photo, President Barack Obama presents a 2010 Presidential Medal of Freedom to Rep. John Lewis, D-Ga., during a ceremony in the East Room of the White House in Washington.

“He was not only the conscience of the Congress, he was a true action hero of our times,” Woodard Spencer said Saturday. “He never hesitated to put his body on the line. From the moment he started out as a teenager — the boy from Troy — onward across his purposeful walk among us.

“He stood up, he sat in, he spoke out, he got into more than his share of very good trouble,” she added. “John did it out of a fidelity to truth and out of an unqualified respect for the people.”

Some of Saturday’s speakers took a moment to wonder how Lewis, if still alive, would have reacted to the current events of the past year.

Pelosi told reporters that Lewis would have been troubled by Friday’s news that a federal judge in Texas had ruled that the Deferred Action for Childhood Arrivals program is illegal. Known as DACA for short, the immigration program created under Obama allows some people who were brought into the country illegally as children to remain in the U.S. and to qualify for work permits.

Lewis would have also surely fought against the sort of voting restrictions that are being considered or passed in dozens of states, noted Woodard Spencer.

Lewis’ nephew, Marcus Tyner, said the family was grateful for the honor, but said “what would please my uncle most” is if Congress passed the voting rights bill named after him.

The John Lewis Voting Rights Act was written to reverse a 2013 Supreme Court decision in which the court’s conservative majority threw out the formula the federal government used to determine which states had such a history of racial discrimination in elections and were, under the Voting Right Act, required to have Justice Department approval before implementing new voting laws or redrawing legislative districts.

The one-year anniversary of the congressman’s passing was marked in other ways around the country Saturday, including “Good Trouble” vigils that pressed for protection of voting rights.

In a statement Saturday, President Joe Biden said he often reflects on the last conversation he and his wife, Jill, had with Lewis.

“Instead of answering our concerns for him, he asked us to remain focused on the unfinished work — his life’s work — of healing and uniting this nation,” Biden said.

In Nashville, a large portion of Fifth Avenue was renamed to Rep. John Lewis Way. Among establishments lining the street is the Woolworth downtown building, where Lewis and other Black civil rights leaders defiantly sat at the segregated lunch counter that wouldn’t serve them in 1960. Lewis was punched in the ribs and saw someone put out a cigarette on the back of another protester.

The Associated Press contributed to this report.

Man, 52, stabbed by one of three suspect at Willie Henderson Park in San Diego – 10News