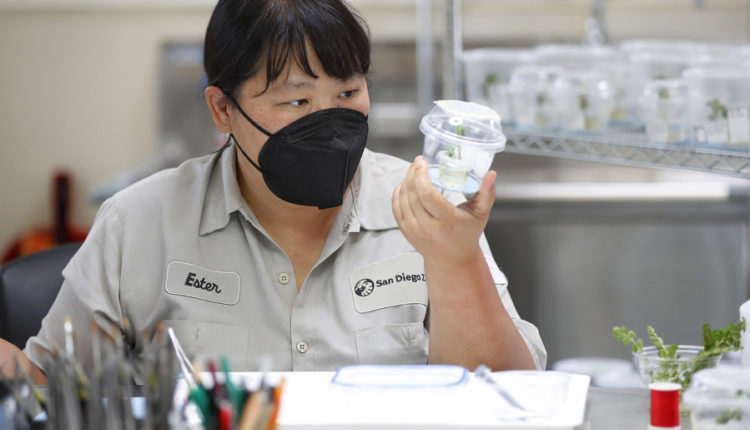 SAN DIEGO — High up in the mountains of San Diego County, there are meadows with creeks and streams where some of San Diego’s rarest butterflies flutter from flower to flower.

But life isn’t as idyllic for the Laguna Mountains skipper as it may sound. These endangered butterflies have vanished from the very mountain range they were named after and are now only found on Palomar Mountain. Climate change, human activity and wildfires threaten to wipe them out altogether.

Ecologists and wildlife experts are trying to change that, with a coalition that includes the San Diego Zoo, U.S. Fish and Wildlife Service and the U.S. Forest Service, among many others. Their goal is to return the skippers to their former range in the Laguna Mountains and ensure they thrive.

That will take time and money. According to a U.S. Fish and Wildlife Service report, it could cost more than $3 million and take until 2045 for the species to recover to the point where it’s no longer considered endangered.

It may seem like a lot of effort for a butterfly you’ve likely never seen or heard of, acknowledges Daniel Marschalek, an insect ecologist who studied the skippers from 2013 to 2017 while at San Diego State University. But he says the measures conservationists take to save these butterflies will help other plants and animals in their ecosystem too.

“Once you start noticing species that start to decline and maybe disappear altogether in certain areas, it should really be kind of a warning sign,” said Marschalek, who’s now an assistant professor at the University of Central Missouri. “It’s reasonably easy to document a decline. But then to figure out why — because it’s usually multiple factors — and then change them, that’s kind of the difficult part.”

The Laguna Mountains skipper is a tiny critter, with a 1-inch wingspan and black wings mottled with white spots.

This butterfly subspecies was last seen in the Laguna Mountains in 1999, and no one quite knows why it vanished. Global warming and a steady dip in rainfall across the region certainly haven’t helped, as these butterflies favor wet mountain meadows. A 2019 report by the U.S. Fish and Wildlife Service cites habitat destruction from cattle grazing as another factor.

The only Laguna Mountains skippers left live on four locations on Palomar Mountain — and nowhere else on Earth. Researchers don’t know exactly how many of these butterflies are left, but Marschalek says their current situation doesn’t bode well for their survival.

“Especially in Southern California, if you have one kind of area that a species is restricted to, eventually it’s going to burn,” he said. “It’s just a matter of time.”

Skippers aren’t capable of the long flights that have made monarch butterflies famous. That means the population on Palomar Mountain can’t travel to the Laguna Mountains — or anywhere else, for that matter.

At least not without help.

“They’re not there. And they can’t get there from Palomar on their own. So we’re going to take them,” said Paige Howorth, the zoo’s curator of invertebrates. “We feel like the habitat is ready.”

A series of conservation measures going back to the 1980s has helped preserve the skipper’s habitat by limiting cattle grazing and visitor access to the Laguna Mountains. That work is now entering a new phase, with the zoo hatching skipper eggs and rearing caterpillars in their lab, which they later plan to transport to the mountains.

It’s painstaking work, says Howorth and her team. They’ve received more than 400 eggs, which they’ve hatched into more than 300 caterpillars. Each one has a smooth body that looks a bit like a green gummy bear with a black head at the end.

Every morning, zoo staff give the caterpillars a light spritz of water to simulate dew that the larvae drink. Then the caterpillars get back to quietly munching on their favorite food source, Cleveland’s Horkelia, a small herb native to Southern California and Baja California.

As they eat away, they eject small black specks of frass. That’s entomologist-speak for poop. Howorth’s team sifts through these poop pellets for something that looks almost identical to frass but certainly isn’t — the caterpillar’s last head capsule, the tough outer layer that protects their head and which they shed while growing. The size of this capsule tells researchers what stage of development the larvae have reached.

Once the caterpillars stop eating and form a chrysalis, they’ll be transported to the Laguna Mountains for release. Most of the chrysalises will lay dormant until next spring, which is when the butterflies will emerge.

But the work doesn’t stop there. The zoo and its conservation partners will continue to monitor the new population for years to come.