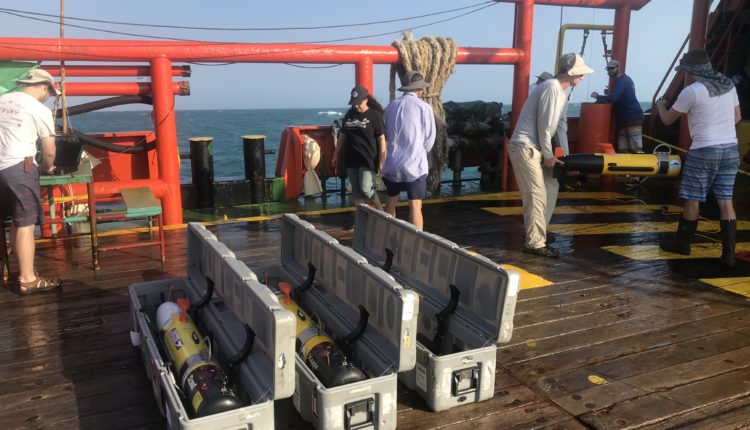 San Diego oceanographers have helped recover the remains of a military flier who crashed off the shore of Vietnam more than 40 years ago.

Recently developed underwater search technology has helped find the remains of a crash that happened in 1967 over the South China Sea.

Two B-52s collided in midair, burst into flames and plunged into the sea. A massive search and recovery effort led to the rescue of seven crew members, but three remained lost under the ocean.

Finding the exact crash site took some work by the Scripps Institution of Oceanography researchers engaged in the project.

RELATED: Scientists: Up To 25,000 Barrels At DDT Dump Site In Pacific

The San Diego team used underwater drones that scanned the ocean floor for debris that fell into murky water.

Finding the crash site in the open ocean took some work.

“One of the workhorses is an underwater robot that has side stamp sonar on board and it allows us to survey wide areas in a very efficient means,” said Eric Terrill, a Scripps Institution of Oceanography scientist.

Crews scanned the ocean floor about 80 feet below the surface. The search was complicated because of low visibility and other garbage on the sea floor.

They finally located what they believed to be the crash site after almost two weeks.

“It makes it much more difficult to put that exact pin in the map where the accident occurred so this being so far offshore,” said Drew Pietruszka, an underwater archaeologist at the Scripps Institution of Oceanography. “We had a decent location but it’s not like today where all these aircraft have GPS units in them and they’re giving sub meter location.”

Your browser does not support inline frames or is currently configured not to display inline frames. Content can be viewed at actual source page: https://youtu.be/efNUddn41HA>

Divers inspected the underwater site and confirmed it was the location where the B-52 went down.

“For decades an operation like this was simply not feasible given the state of underwater technologies,” said Bob Hess, a development engineer at Scripps who participated in this and several previous undersea Project Recover expeditions. “By harnessing recent advances in these technologies, many of these sites throughout the world are becoming accessible for the first time.”

Researchers also discovered what appeared to be human remains amidst the wreckage.

Those remains were lifted from the ocean floor and sent to Hawaii where forensic scientists confirmed the remains belonged to radar navigator Paul Avolese.

The military flier was from New York and serving with the second bomber squadron.

Avolese’s remains were returned to the next of kin for burial with full military honors.

“It was an honor to participate,” said Pietruzska.

The project was made possible because of cooperation with Vietnam, the US Defense POW/MIA Accounting Agency and researchers in San Diego and Delaware.

I focus on the environment and all the implications that a changing or challenging environment has for life in Southern California. That includes climate change, endangered species, habitat, urbanization, pollution and many other topics.