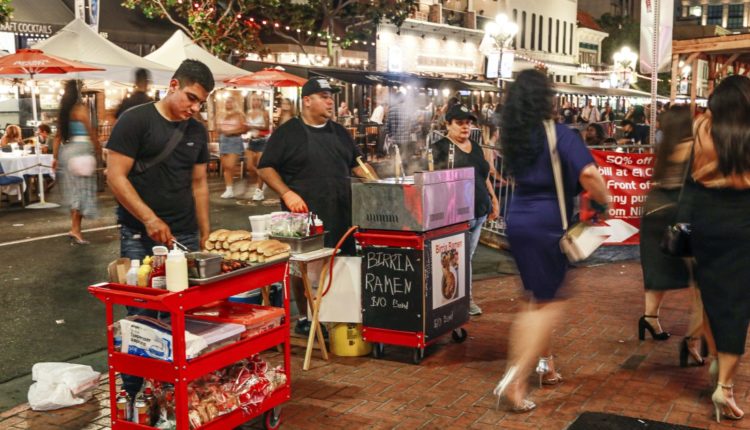 San Diego is considering a crackdown on sidewalk pushcart vendors amid an uproar of complaints about unfair competition and illegal dumping of trash and grease in some neighborhoods.

City Council President Dr. Jennifer Campbell says she is taking the lead on a new citywide street vending ordinance that will provide clear enforcement guidelines the city has lacked for nearly three years.

Merchant groups in downtown and the city’s beach communities say vendors have flooded business districts and parks, with no restrictions, because of a 2018 state law that aims to encourage street vending as a new class of small business.

“This is a huge health and safety problem,” said Michael Trimble, executive director of the Gaslamp Quarter Association. “It’s a major oversight for the city to have no ordinance in place, because that prevents the police from doing anything about it.”

Advocates for street vendors say critics have exaggerated the dangers and chaos created by the vendors, and that those complaining are mostly businesses frustrated they are facing new competition from street vendors.

While advocates say they welcome new city legislation focused on gray areas in state law, they want any policy proposal to be based on data and analysis instead of knee-jerk reactions. They also say the rules should vary by neighborhood.

“What’s happening at the beach and some other areas isn’t happening everywhere,” said Natasha Salgado, community engagement coordinator with the Logan Heights Community Development Corporation. “This should be data driven. They need to know what the state of vending is in the city.”

The controversy comes in the wake of SB 946, a state law passed in 2018 that says any vendor regulations created by cities must focus on solving health and safety problems, not limiting economic competition.

Supporters said the goal of the law was to encourage a new class of small entrepreneurs among California’s low-income residents, many of them immigrants with families.

Since 2018, many cities across the state have passed local ordinances that regulate street vendors in the narrow ways that SB 946 allows.

Former Mayor Kevin Faulconer proposed city legislation in 2019 that was hailed by merchant groups but criticized by advocates for vendors.

Faulconer’s proposal would have banned street vendors in high-traffic neighborhoods and parks, but it was never brought forward for a council vote after some critics called it an unfair crackdown with racist overtones.

Mayor Todd Gloria, who replaced Faulconer last winter, said in February he was committed to crafting legislation that would be supported by advocates and critics of street vending.

Before getting elected, Gloria acknowledged that a world without local pushcart regulations was a kind of “wild west,” and he committed to gathering input from all sides. He supported SB 946 while a member of the state Assembly.

But work on a city ordinance shifted last spring from Gloria to Council President Campbell, whose district includes the beach communities that have been most affected by the surge in street vending under the new state law.

“I am currently working with the mayor and our city departments to enforce existing law and reign-in street vending,” Campbell told the Union-Tribune by email. “For vending that falls under grey areas of the law, my office is now taking the lead on a city-wide street-vending ordinance to provide clear enforcement guidelines.”

Nick Serrano, Gloria’s deputy chief of staff, said it makes sense for the mayor to defer to Campbell.

“This issue is particularly prominent in Council President Campbell’s district and important to her as the leader of the legislative body, so she is leading the city’s efforts on an ordinance that will create the rules going forward,” Serrano said.

Denny Knox, executive director of the Ocean Beach Main Street Association, said she is confident whatever Campbell proposes this fall will make things better for the merchants she represents.

“I have to be optimistic that she gets it — they realize how outrageous it is,” Knox said. “The vendors glom onto any event we have. The city is giving away our park space to entrepreneurs, with no money coming in return.”

Trimble, the Gaslamp official, and Knox say the vendors have created an uneven playing field because businesses with storefronts must pay a slew of city and county fees that street vendors don’t have to pay.

“It’s so unfair,” Knox said. “If we want to develop entrepreneurs, we need to have some rules and then teach them to follow those rules.”

Trimble stressed that most of the street vendors in the Gaslamp aren’t “one-off mom-and-pop businesses,” but people recruited to operate the carts by investors.

He said dozens of carts are rolled out of trucks every weekend night about 9 p.m. in the Gaslamp. They sell hot dogs into the early hours of the morning when the bars close, he said.

Along with these vendors comes grease and trash and other problems that police have no power to curb.

“It’s not about criminalizing vendors; it’s about making sure public safety is a priority,” Trimble said.

Denezel Bynum cooks bacon as he makes Bully Bagels at his food booth during the City Heights Street Food Festival in 2019.

Denezel Bynum, a street vendor who sells hamburgers in various parts of the city, said merchant groups are exaggerating the size and scope of the problem.

“I understand that they are pissed off when their restaurant is empty and there is a guy selling hot dogs out front,” he said.

Bynum, who has been a street vendor for about two years, said he is open to some local regulations as long as they are reasonable.

“I feel like they should at least allot a certain area for us to operate every day,” he said. “How else are we supposed to survive?”

Bynum said it typically costs $300 or more to become an official vendor at a farmer’s market, stressing that it also requires up-front cash that some vendors don’t always have.

Salgado, the Logan Heights official, said many street vendors deal with harassment and other problems. The last thing they need are strict regulations that aren’t based on any analysis of what’s actually going on.

“We can’t vilify an individual who is trying to create some kind of income for themselves,” she said.

Campbell’s proposal would likely be presented to the City Council’s economic development committee this fall before possible approval by the full council.