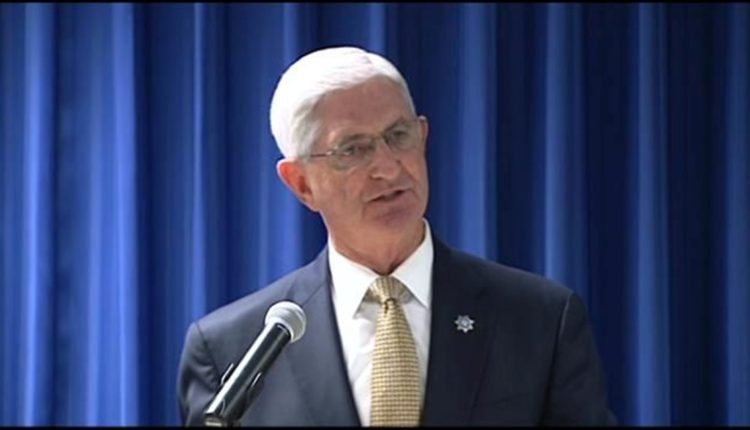 “I think three terms as sheriff has been very rewarding but I think it’s time to turn the reigns over to someone else,” Gore said.

SAN DIEGO COUNTY, Calif. — There will be no fourth term for San Diego County Sheriff Bill Gore. He’s not running for re-election. That means voters across San Diego will pick a new sheriff in the November 2022 elections.

Gore, who is 73 years old, said it’s been an honor and privilege to serve the people of San Diego County. He joined the agency in 2004 serving as assistant sheriff for the county’s law enforcement services bureau before being appointed undersheriff in 2005. Gore was appointed sheriff in 2009 after Sheriff Kolender’s retirement. He was elected sheriff by voters in 2010 and won re-election in 2014 and 2018.

He touts a list of accomplishments including lowering the recidivism rate in county jails and focusing on information based policing to help tackle crimes.

But when asked if he had any regrets, Sheriff Gore said, “I’ve been disappointed primarily in myself. I’ll take a lot of the blame for it. I probably created a relationship with some reporters at the UT (San Diego Union-Tribune) that became unnecessarily antagonistic — where it didn’t have to be. My point was, although I disagreed with them on something, doesn’t mean that we’re not dedicating resources and addressing issues, just because I disagreed with them. And I think that’s the perception that’s been created, unfortunately. Which is too bad. It detracted from the hard work that the men and women in our detention services bureau do every day and the commitment we’ve made to improving the medical and mental healthcare in our facilities.”

Another lesson learned as top cop in the county, was addressing the mortality rate in San Diego jails, which at one point had the highest mortality rate among comparable counties in the state.

According to the Union-Tribune, at least 140 people died in custody over a 10-year span beginning in 2009. To which, Gore said he brought in a team of experts to figure out the problem.

A reflective Sheriff Gore looks back at some of the tensest moments of the racial reckoning of the summer of 2020 and said, he and the department as-a-whole, learned a lot of lessons.

“It was a tough year with the pandemic and a lot of that. The civil unrest in some of the county. I think we’re a better department after going through that,” he said.

However, Gore said, it’s the California Criminal Justice Realignment of 2011 that serves as his department’s biggest challenge.

“That shifted 40,000 inmates from State Prisons to County Jails. It was a gigantic adjustment and I’m so proud of the way this department and the entire public safety community in San Diego handled that shift,” Gore said.

Sheriff Gore shares other accomplishments of his administration saying, “We went from a 72% recidivism rate in the state to, the last numbers I saw in the county were 33%. So that’s a gigantic difference. You do that by improving the rehabilitation programs in your facilities, giving people the skills and abilities they need to be successful when they leave our institutions.”

All of this, Gore said, while being smart about exactly how to fight crime. Gore credits what he calls “information-based policing” and making sure there are enough resources to help protect all of San Diego County.

“When I came into the Sheriff’s Department, I think we had six analysts, six crime analysts. I think we have 33 crime analysts now. And if we had a series of robberies, burglaries or whatever it is, we’d catch that series on the third or fourth instance and not on the 23rd,” he said.

Gore touts one of the lowest crime rates of a comparable county in size as a measure of success but adds going forward, the department can do more to ensure everyone in San Diego County can trust law enforcement.

“The number I’ve seen is 250 to 300 thousand undocumented people in San Diego County. They have to feel safe in reporting crimes and being witnesses to crimes otherwise, the entire county becomes less safe. We create a whole victim base that are afraid to report crime and are afraid to talk to law enforcement,” he said.

Sheriff Gore is also endorsing Kelly Martinez in the Sheriff’s election to replace him, noting that, “She’s a tremendous people person, she has the ability to connect with people inside the department where she’s highly respected, by rank-and-file members and members of the community that she served in.”

When asked why is he not seeking re-election, Gore said it’s simple.

“I think the timing is just right and I’m not exactly a spring chicken anymore. I think three terms as sheriff has been very rewarding but I think it’s time to turn the reigns over to someone else. I look at the leadership of the San Diego County Sheriff’s Department right now and I don’t think it’s ever been stronger,” he said.