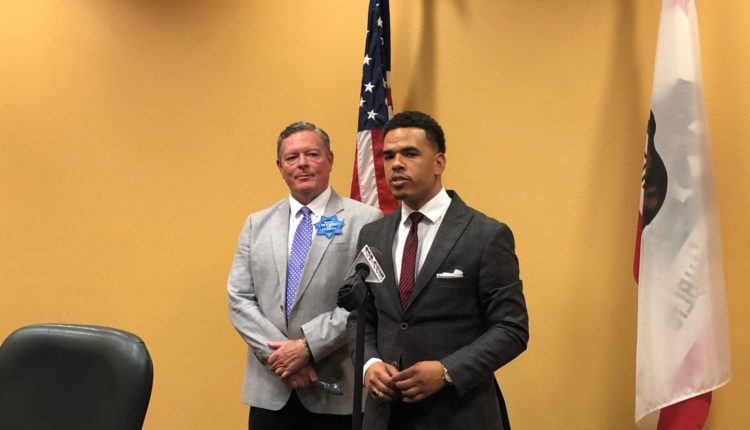 Myers, 60, announced his candidacy last week, becoming the second candidate to enter the race to replace Sheriff Bill Gore, who said last month he will not seek re-election after three terms. Undersheriff Kelly Martinez, 58, announced plans to run for sheriff earlier this month.

The primary will be held June 7.

Following Monday’s event, which was not open to the media, Myers received the endorsement of the Rev. Shane Harris, a civil rights activist who organized the discussion at the Jacobs Center For Neighborhood Innovation. The event gave Myers, a 33-year veteran of the Sheriff’s Department, an opportunity to discuss his candidacy with the group, which featured several Black faith leaders and police reform advocates, including Bishop Cornelius Bowser, the Rev. Lynn Sharp and Apollo Olango, the brother of Alfred Olango, who was fatally shot by a police officer in El Cajon in 2016.

Harris said he believes Myers will prioritize what Harris said he considers one of the county’s most pressing issues: the deaths of inmates in local jails.

Myers, who spoke at the news conference, said there is a disconnect between what he called “outdated” leadership within the Sheriff’s Department and the community’s expectations for law enforcement.

“What I’m asking the community is to help me bring those lines together to make law enforcement leadership responsive, transparent and accountable to the community,” Myers said.

He said he is able to explain why law enforcement officers and deputies do what they do and engage in conversations about how they can improve to meet the community’s expectations.

Martinez, a 36-year veteran of the force, issued a statement to the Union-Tribune in response to Monday’s event and Harris’ endorsement of Myers.

“As Undersheriff I have already made changes that are showing results in our jails,” Martinez said.

She said she has prioritized hiring more medical and mental health care staff, notifying the public of in-custody deaths within 24 hours and equipping deputies with body-worn cameras in jails. She also said she welcomes a state audit of the county’s jail system and looks forward to the results “and the opportunity to continue to implement meaningful changes.”

At least one other candidate is expected to join the countywide race: San Diego Assistant City Attorney John Hemmerling told the Union-Tribune last week that he plans to file election paperwork after Labor Day.