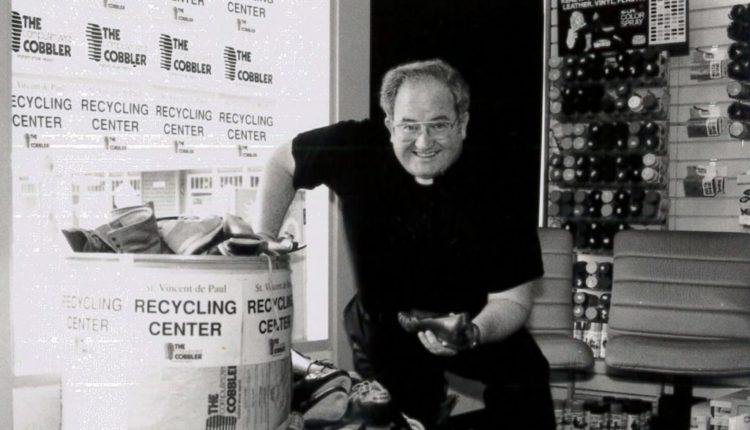 The following article has been republished with permission from The Southern Cross, the official newspaper of the Diocese of San Diego.

With his strong Bronx accent and sly smile, Msgr. Joseph Carroll was a San Diego icon.

After years of declining health, which saw the amputations of both of his feet as the result of complications of diabetes, Father Joe died in the early hours of July 11. He was 80.

Father Joe once said his greatest accomplishment was helping others to see that the homeless are just “neighbors who need our help.”

“When you take the name ‘homeless’ out of it … it seems to take the fear out of working with our neighbors in need,” Father Joe told about 800 people who had gathered at the Town and Country Resort & Hotel in Mission Valley in late June 2012 to celebrate his life and work.

Father Joe added that his life had been enriched by daily encounters with people who have benefited from the programs of Father Joe’s Villages.

Thanks to a series of long-running television commercials, in which he solicited donations of not only cars, but also boats and planes to fund local homeless services, Father Joe was more than the face of Father Joe’s Villages. For San Diegans of diverse faiths, he was arguably the most recognizable local Catholic. And for local Catholics, including bishops and fellow priests, he was a larger-than-life personality and a force of nature.

“Father Joe Carroll was a priest who made Christ’s message of compassion and mercy real in a world where we so often look the other way rather than embrace those who are suffering in our midst,” said Bishop Robert McElroy of the Diocese of San Diego. “Given the task of rejuvenating our diocesan outreach to the homeless four decades ago, he completely recreated that outreach and gave to San Diego an incredible network of programs for those without shelter that radiate a profound and unrelenting humanity and hope.

“The housing network of Father Joe’s Villages is a testimony to his life’s work. But an even deeper testimony lies in the fact that Father Joe taught so many of us in San Diego to see the homeless as truly our neighbors, equal in dignity and children of the one God who is Father of us all. In this deeply pastoral ministry, Father Joe Carroll stands distinguished in our county and in our nation.”

“Though I am personally saddened at Father Joe Carroll’s passing, I fondly remember the stories and laughs that we shared, and his legacy will live on in all that we do,” said Deacon Vargas.

Noting how Father Joe had “selflessly and tirelessly served our community” for decades, he said, “We celebrate his lifetime of service.”

Raised in the Bronx, he moved to Southern California in 1963. There, he entered the seminary.

Father Joe was ordained to the priesthood for the Diocese of San Diego on June 28, 1974, at St. Joseph’s Church in Carpinteria, California. The ordaining prelate was Bishop Leo T. Maher.

His early years of ministry as a priest were spent in parish life, including assignments as associate pastor of Our Lady of Grace, El Cajon; St. Pius X, Chula Vista; and St. Rita, San Diego.

In July 1982, Bishop Maher tapped him to serve as director of the St. Vincent de Paul Center, which was already in existence about a quarter-century before Father Joe was even a priest.

“A lot of people think this reach-out to the homeless is all Father Joe Carroll, but it was here long before I was,” Father Joe said in April 2010, as St. Vincent de Paul Village marked its 60th anniversary.

In his early years as director, Father Joe served peanut butter sandwiches to the homeless daily. He also began traveling the country to learn about what social services were available to the poor and homeless. He may not have been its founder, but under the enterprising priest’s watch, the center would grow into the present-day Father Joe’s Villages, which has a four-block comprehensive campus in East Village and programs across the county that house about 2,000 nightly.

Last year, the organization served nearly 12,000 homeless individuals. It has served more than 60,000 people in the last decade.

“(Father Joe) took … something that had been lingering for some time and gave it life. He made it something exciting,” said Father “Chuck” Fuld, editor emeritus of The Southern Cross newspaper.

“The (St. Vincent de Paul) ministry had been there for years,” he said. “It always sort of rolled along … but he got into it and, all of a sudden – wow! All of a sudden, buildings started going up.”

(The Southern Cross/Diocese of San Diego)

Father Joe’s Villages owns and manages 10 buildings across San Diego County and provides support services and rental assistance to even more. Its most recent building, Saint Teresa of Calcutta Villa, is a 14-story building at 14th and Commercial streets. Expected to open next January, the building will include 407 units for more than 500 people and community space on every floor.

On various occasions, Father Joe has recounted his initial reluctance to accept the assignment that ultimately would define both him and his priesthood.

“I argued with Bishop Maher at the time that I wasn’t the right person,” he recalled in 2010. “Now, of course, I have to look back and say, I guess bishops do know what they’re doing.”

Msgr. Dennis Mikulanis, a longtime friend, explained the reason for Father Joe’s appointment. In remarks given at celebration in Father Joe’s honor in 2012, Msgr. Mikulanis said the decision was made after Bishop Maher and the entire diocesan personnel board for priests agreed that Father Joe was “the biggest hustler in the diocese.”

“He has been a hustler for Christ, for the Church, from the very beginning,” said Msgr. Mikulanis. “None of it has benefited him. It’s benefited the Church. It’s certainly benefited our community.”

In a 1984 television commercial for Father Joe’s Villages’ vehicle donation program, Father Joe made that “hustler” persona his own. His opening line was, “Hi, I’m Father Joe. I’m a hustler.”

That moniker also made it into the title of his memoir (written with Kathryn Cloward), Father Joe: Life Stories of a Hustler Priest, which was published in May.

He led Father Joe’s Villages until his 70th birthday on April 12, 2011, at which time he transitioned to the role of president emeritus. He retired from active ministry that November.

In addition to his work with the homeless, Father Joe supported the Boy Scouts of America, serving as their diocesan chaplain from March 1975 through July 2014, and the Knights of Columbus, serving as chaplain for the California State Council in the early 1990s.

Father Fuld recalled how Father Joe, as Boy Scout chaplain, convinced him to be one of three chaperones on a cross-country trip to attend the 1981 National Scout Jamboree, held in Fort A.P. Hill, Virginia.

“It was a great trip for me. For one thing, I gave up smoking … because I wasn’t going to smoke in front of the kids,” said Father Fuld, who at the time was still a lay Catholic.

But the trip had an even more significant impact on his future: helping him to discern a priestly vocation.

“It was one of the things that got me pointed in that direction,” said Father Fuld, who was ordained in 1986.

Msgr. Terry Fleming, a priest of the Archdiocese of Los Angeles and a friend since their seminary days, once shared that Father Joe wasn’t keen on receiving that honorific title.

“I remember the conversation when Bishop Maher told him he was being made a monsignor,” he recalled in 2012. “He objected vehemently. He said, ‘Bishop, people won’t give money to ‘Msgr. Joe.’ You’re going to ruin my image.’”

Bishop Emeritus Robert Brom, who succeeded Bishop Maher in 1990 and led the Diocese of San Diego until his retirement in 2013, doesn’t recall the specifics of his first meeting with Father Joe. But he said that first encounter “certainly” would have taken place shortly after his own arrival in the diocese as coadjutor bishop in 1989, because he was aware of Father Joe as “one of the priests whose ministry was most exceptional.”

Reflecting on Father Joe’s local fame, Bishop Brom said that having “somebody that visibly compassionate, that visibly energized to reach out to those in need” was “a tremendous witness to what the Church stands for.”

But what struck him most about Father Joe was something much more private: the late priest’s response to suffering.

“There was significant suffering as a part of his life,” said Bishop Brom, “but he never brought attention to it and he never complained. Ever. … He would join his sufferings to those of Jesus on the cross for the salvation of the world.”

“He learned that his greatest contribution to promoting the reign of God was perhaps, not his fundraising, not his ‘hustling’ … but the suffering he silently bore to promote the reign of God,” Bishop Brom said.

Auxiliary Bishop John Dolan, at the 2012 celebration of Father Joe’s life and work, said that he could tell “a million stories” about Father Joe. But he had a clear favorite. David Copley, publisher of Copley Press, had canceled a lavish dinner and decided to donate the lobsters to Father Joe’s Villages, Bishop Dolan recalled. About a week later, Father Joe was leading Fred Rogers of “Mister Rogers’ Neighborhood” on a tour. When they arrived at the kitchen, he said, Rogers overheard a homeless man lamenting yet another day of lobster bisque.

“Father Joe Carroll was a heroic man who helped his community with the entirety of his heart and soul. He helped the poor, the hungry and the homeless and had a gift for bringing people together in his mission to serve,” recalled U.S. Rep. Juan Vargas, who represents the 51st Congressional District.

“I hope the Church canonizes him, as his work was truly saintly.”