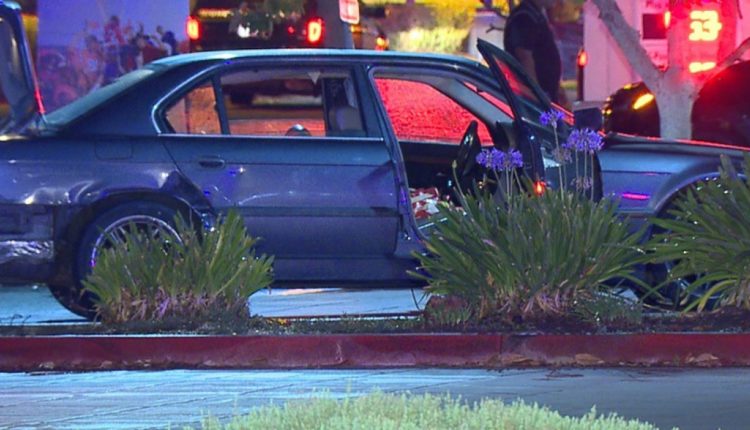 At around midnight Monday, San Diego County sheriff’s deputies were pursuing a BMW that had left the scene of a reported robbery in the La Mesa area.

With deputies and California Highway Patrol officers in pursuit, the BMW traveled west on Interstate 8 and then transitioned to northbound Interstate 15.

CHP officials confirmed someone from the BMW opened fire several times at officers during the chase.

The BMW eventually made its way into Riverside County and exited in Murrieta. The car stopped at a Shell gas station due to possible mechanical problems, a witness said.

In the station’s parking lot, the CHP said the three people abandoned the BMW and tried to carjack another car.

Deputies arrived at the scene and released a K-9, but one of the suspected robbers shot the dog.

After trying to run away, the three suspected robbers were finally taken into custody.

The dog was taken to a hospital for treatment, and ABC 10News learned the K-9 is expected to be OK.

The would-be carjacking victim was not hurt.

CHP and sheriff’s officials are investigating the incident, but authorities said law enforcement officers did not return fire during the pursuit and in the confrontation at the Murrieta gas station.