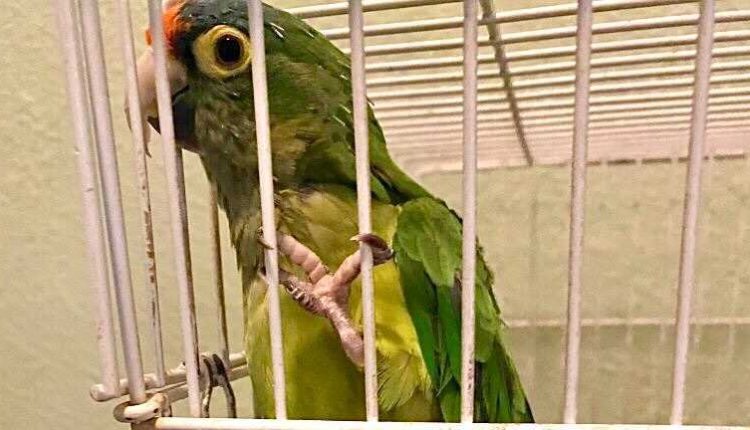 A pair of Humane Law Enforcement Officers from San Diego are being hailed as heroes for rescuing a 36-year-old parakeet in South Lake Tahoe after its owners fled the home due to the destructive Caldor Fire.

San Diego Humane Society (SDHS) Officers Joy Ollinger and Sandra Anderson have been in El Dorado County since last week to assist in the response to the ravenous blaze. Since their departure on Thursday, the dynamic duo has helped their share of precious pets like dogs, chinchillas, turtles and even a chameleon.

Among those animals helped by the brave pair was Pepe the orange-fronted parakeet.
On Tuesday, SDHS Tweeted a video of the officers approaching Pepe in his cage. The beautiful bird stayed behind at his home while his owners were ordered to vacate due to the ongoing fire.

#CaldorFire: A 36-yr-old orange-fronted parakeet named Pepe is safe, thanks to our Humane Officers in the field in South Lake Tahoe. The owners gave us permission to climb through the window of their home to retrieve him so we could bring him to safety after they were evacuated. pic.twitter.com/u444Esy83i

“We got a call of a parakeet in someone’s house because they were, again, unable to make it back to their home in time,” Officer Anderson says in the video.

She went on to explain that she was able to get into the home through a window, with the owners’ permission. After carefully swinging one leg into the window, Anderson was able to enter the home and reach the parakeet.

Pepe, ever so friendly and welcoming, could be seen in a video at the edge of his cage, curiously looking around as Anderson gently scratches his stomach with her finger, resulting in gleeful squawks from the pet.

Our Emergency Response Team in #ElDoradoCounty assisting with rescue efforts of animals impacted by the #CaldorFire have been busy setting up an Incident Command Post in South Lake Tahoe, getting dispatch operations ready and preparing to do welfare checks behind fire lines. pic.twitter.com/ks8BQiMTUa

Anderson and Ollinger were deployed to Northern California on Aug. 26 as per request by the California Governor’s Office of Emergency Services. There, they’ve executed animal control duties and have monitored the welfare of animals that are sheltering in place.

The Caldor Fire was ignited on Aug. 14 and its insatiable flames grew to more than 191,00 acres near Lake Tahoe as of Thursday morning. It forced evacuations for all 22,000 residents of South Lake Tahoe and tens of thousands of tourists.