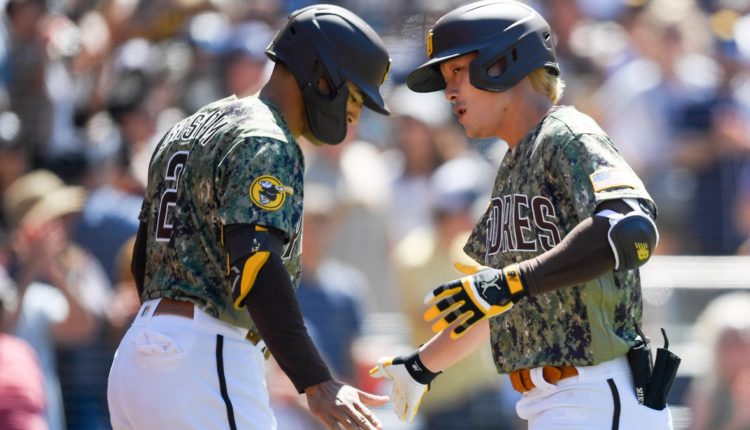 The Padres won’t have Fernando Tatis Jr. for at least 10 days. It’s a good thing they still have a whole lot of really good hitters available and when they all click it’s still a dangerous offense.

San Diego scored four times in the 1st inning and rolled to an 8-1 win over the Rockies on Sunday afternoon at Petco Park, salvaging a split of their 4-game set with Colorado.

Jake Cronenworth got the scoring started with a 2-run double in the 1st inning. The All-Star, batting cleanup in this game, had three hits and drove in three runs. He would also score a run in the opening frame because the guy filling in for Tatis had an El Nino-esque afternoon.

Ha-Seong Kim ripped a 2-run double down the left field line to make it a 4-0 game against Colorado starter Austin Gomber, who was pulled after the inning and took the loss. Kim would have an even bigger blast a few innings later.

It would be a big help for the Friars if they could have some of their veteran stars who have underachieved in 2021 start swinging the bats like they’re capable of. In the 4th inning Eric Hosmer, who didn’t start against the lefty-throwing Gomber, slapped a pinch-hit double to left-centerfield to score the newly-acquired Jake Marisnick and make it 5-1.

In the 5th inning Wil Myers snuck a single up the middle to score Cronenworth and run the lead to 6-1. It was a potentially nice sign to see both Hosmer and Myers drive in a run on the same day.

The game was basically put away for good in the 6th when Kim jumped all over a 97-MPH fastball from Antonio Santos and deposited it in the 2nd deck in left field.

One of the few concerns the Padres had about Kim’s adjustment from the Korean Baseball Organization to Major League Baseball was how quickly he’d be able to catch up to elite fastball velocity so for the 25-year-old to barrel a heater like that is quite encouraging.

On the mound it was another group effort. Starting pitcher Chris Paddack joined Tatis on the 10-day IL with an oblique strain on Saturday night, further depleting the Friars’ ailing starting rotation.

Reiss Knehr returned from AAA El Paso and did what his team needed him to do. The 24-year-old rookie who’s kind of become San Diego’s emergency spot-starter went 3.0 innings, allowing one run and punching out two.

After Knehr, six relievers combined to 6.0 innings of shutout ball. striking out eight.

The Padres take Monday off, then start a brief 2-game set in Oakland with Blake Snell on the mound.