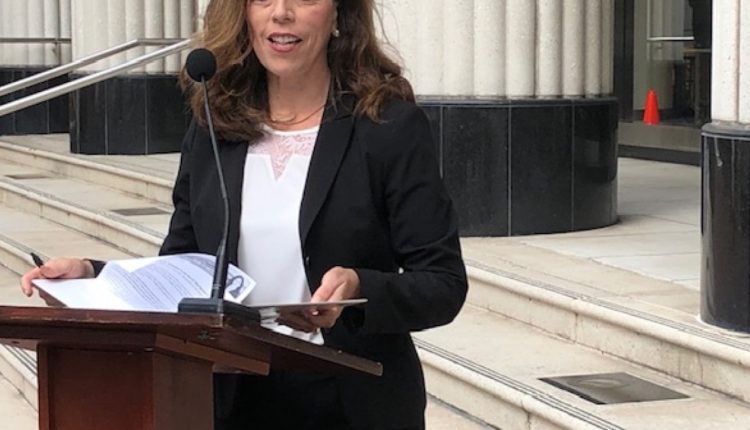 Dorian Hargrove, the NBC 7 journalist who uncovered key issues with the city’s handling of the 101 Ash St. high rise before being threatened with a criminal investigation and publicly disciplined after one story was partially retracted, sued the city of San Diego and City Attorney Mara Elliott Friday.

The complaint, which was filed in U.S. District Court, accuses Elliott and her top lieutenant, Assistant City Attorney John Hemmerling, of interfering with Hargrove’s journalism and violating his civil rights.

The suit claims Elliott and Hemmerling used their authority as public officials to defame Hargrove and prevent him from earning a living as an investigative journalist.

It seeks a jury trial, unspecified damages and an injunction against any restrictions on the rights of journalists to expose public corruption.

The City Attorney’s Office in a statement called the lawsuit meritless and said it is looking forward to learning more about the NBC 7 reporting that led the news organization to retract part of its story last September and to suspend Hargrove.

“Without his lawsuit, it’s possible that the perpetrators would get away with their attempt to interfere with an election,” the statement said.

“As to Mr. Hargrove’s baseless claim that the city attorney is responsible for his damaged reputation, we remind San Diegans that Mr. Hargrove has previously apologized for his conduct on Twitter, saying, ‘This is on me’.”

The lawsuit says Elliott and Hemmerling had a history of trying to intimidate journalists in order to suppress news that might reflect poorly on the elected city attorney during the months leading up to her re-election effort.

“Defendants had a practice of contacting media corporation employers to retaliate against reporters on the 101 Ash St. story to threaten their employers with adverse consequences if they do not take action to prevent their journalists from publishing stories revealing public corruption and fraud associated with 101 Ash St.,” the complaint alleges.

The lawsuit noted that after one July 2020 report based on confidential city documents, Elliott and Hemmerling sent Hargrove a letter informing him that his possession of the records was illegal. The letter demanded the records’ return and told Hargrove they had opened a criminal investigation into how he obtained them.

“If you delay or refuse to comply, I ask that you preserve the documents and refrain from destroying or altering them in any way,” the letter said. “Doing so will constitute a separate crime of destroying evidence in a criminal investigation.”

Hargrove posted that letter on social media. Elliott, whose legal authority in criminal cases is limited to filing misdemeanor charges, was sharply criticized for her action and reversed course the next day.

“The letter my office sent earlier to an NBC reporter never should have been sent,” she said in a public statement. “My office has never — and will never — prosecute a journalist or compel them to reveal confidential sources.”

Hargrove’s lawsuit comes nearly one year after he and colleague Tom Jones were suspended without pay by NBC 7 officials after the station retracted part of a story the journalists authored early last September.

That report cited emails indicating that members of then-Mayor Kevin Faulconer’s administration withheld critical information from the City Council before it voted to approve the lease-purchase of the Ash Street building back in 2016.

The city paid tens of millions of dollars to lease the property, which cannot be occupied due to asbestos and other issues. A consultant’s report later estimated it would cost $115 million to make the building safe for use.

The NBC 7 story from Sept. 3 included confidential findings from the Burke Williams Sorensen law firm, which had been hired to examine the Ash Street transaction.

NBC 7 reported that investigators from the law firm had wanted to talk to then-mayoral candidate Todd Gloria about his role in approving the lease when he served on the council in 2016 but Elliott blocked that interview.

That assertion was included in a footnote in the report, NBC 7 said.

Within hours of its publication, both Elliott and Gloria denied that claim and demanded that the story be retracted.

Burke Williams Sorensen issued a public statement saying that the footnote, “Footnote 15,” had been fabricated, and speculation quickly shifted to who might have put the footnote into the confidential report obtained by Hargrove and Jones.

Later that month, the television news outlet formally retracted the Footnote15 portion of the story and announced that Hargrove and Jones had been suspended.

Both journalists also were precluded from reporting on San Diego City Hall and on candidates seeking city office, the station announced.

“Our investigation revealed missteps in our reporting and in our process for checks and balances,” the company said. “Reporting for our community is a great responsibility, privilege and honor that we take very seriously.”

In his lawsuit, Hargrove alleges that the City Attorney’s Office wrongly demanded that NBC 7 announce its personnel decisions publicly in an effort to discredit the journalists and to suppress similar reporting by others.

It was “an example to the journalist community of the consequences of publishing stories on this topic or relying upon confidential informants from the city of San Diego, thereby censoring and threatening the media,” the suit said.

“It was designed to intimidate informants and/ or witnesses from coming forward to journalists with information damaging to defendants, thereby censoring and interfering with their exercise of constitutionally protected speech,” the complaint states.

Shea also represents some city employees and contractors who have claimed they were exposed to asbestos while renovating the 19-story office tower on Ash Street during the few weeks it was opened before being evacuated in January 2020.

The defamation case joins a long series of lawsuits related to the troubled Ash Street acquisition.

In addition to the dozens of asbestos-related claims, the city is being sued by San Diego resident John Gordon, who alleges the 2016 transaction is illegal because it indebted the city without a public vote.

Elliott then sued the landlord in October, asking a judge to validate that decision. The landlord and related parties counter-sued the city early this year.

In late June, the city amended its initial lawsuit seeking to void the deal and a similar contract from 2015 for the Civic Center Plaza, a high rise just across from City Hall.

The city also stopped making its monthly payments on the Civic Center Plaza.

According to Elliott, both agreements are illegal because an adviser to Faulconer collected $9.4 million from seller Cisterra Development for the advisor’s work on both leases without disclosing his financial interest in the deals.

The payments were not publicly known until The San Diego Union-Tribune disclosed them in June.

The city also is fighting an eviction effort by the lender in the Civic Center Plaza transaction. A hearing in that case is scheduled for Wednesday in San Diego Superior Court.