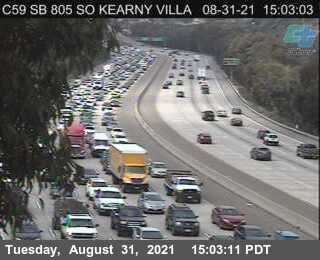 Traffic is at a near standstill Tuesday afternoon on southbound Interstate 805 just north of Interstate 8.

California Highway Patrol officers shut down the far three lanes at about 1:35 p.m., and that remained the case nearly four hours later.

About an hour after the lanes were closed, a representative for the San Diego Police Department confirmed to NBC 7 that Friars Road between Qualcomm Way and River Run Drive was closed in both directions. The I-805 runs above Friars Road between those points.

Officials said shortly afterward that the connectors from eastbound and westbound I-8 from the I-805 south were also closed to traffic. Caltrans encouraged southbound drivers north of Balboa Avenue to find a different route.

A large number of police and other emergency vehicles were at the scene, as well as below the freeway on Friars Road.

Traffic was moving through the area, although slowly, at 5:15 p.m.