From the Archives: First U.S. Open Sandcastle Competition kicked off in Imperial Beach 40 years ago. – The San Diego Union-Tribune 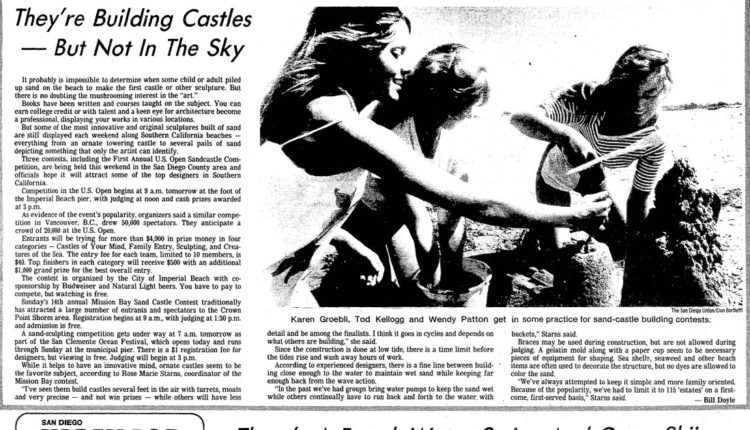 The First Annual United States Open Sandcastle Competition in Imperial Beach took place in 1981. The popular annual competition called it quits in 2011 after three decades — a victim of its own success. Organizers said they were being overwhelmed by a quarter-million spectators on the beaches of the city with a population of 20,000.

They’re Building Castles — But Not In The Sky

It probably is impossible to determine when some child or adult piled up sand on the beach to make the first castle or other sculpture. But there is no doubting the mushrooming interest in the “art.”

Books have been written and courses taught on the subject. You can earn college credit or with talent and a keen eye for architecture become a professional, displaying your works in various locations.

But some of the most innovative and original sculptures built of sand are still displayed each weekend along Southern California beaches everything from an ornate towering castle to several pails of sand depicting something that only the artist can identify.

Three contests, including the First Annual U.S. Open Sandcastle Competition, are being held this weekend in the San Diego County area and officials hope it will attract some of the top designers in Southern California.

Competition in the U.S. Open begins at 9 a.m. tomorrow at the foot of the Imperial Beach pier, with judging at noon and cash prizes awarded at 3 p.m.

As evidence of the event’s popularity, organizers said a similar competition in Vancouver, B.C., drew 50,000 spectators. They anticipate a crowd of 20,000 at the U.S. Open.

Entrants will be trying for more than $4,000 in prize money in four categories-Castles of Your Mind, Family Entry, Sculpting, and Creatures of the Sea. The entry fee for each team, limited to 10 members, is $40. Top finishers in each category will receive $500 with an additional $1,000 grand prize for the best overall entry.

The contest is organized by the City of Imperial Beach with cosponsorship by Budweiser and Natural Light beers. You have to pay to compete, but watching is free.

Sunday’s 14th annual Mission Bay Sand Castle Contest traditionally has attracted a large number of entrants and spectators to the Crown Point Shores area. Registration begins at 9 a.m., with judging at 1:30 p.m. and admission is free.

A sand-sculpting competition gets under way at 7 a.m. tomorrow as part of the San Clemente Ocean Festival, which opens today and runs through Sunday at the municipal pier. There is a $1 registration fee for designers, but viewing is free. Judging will begin at 3 p.m.

While it helps to have an innovative mind, ornate castles seem to be the favorite subject, according to Rose Marie Starns, coordinator of the Mission Bay contest.

“I’ve seen them build castles several feet in the air with turrets, moats and very precise — and not win prizes — while others will have less detail and be among the finalists. I think it goes in cycles and depends on what others are building,” she said. Since the construction is done at low tide, there is a time limit before the tides rise and wash away hours of work.

According to experienced designers, there is a fine line between building dose enough to the water to maintain wet sand while keeping far enough back from the wave action.

“In the past we’ve had groups bring water pumps to keep the sand wet while others continually have to run back and forth to the water with buckets,” Starns said.

Braces may be used during construction, but are not allowed during judging. A gelatin mold along with a paper cup seem to be necessary pieces of equipment for shaping. Sea shells, seaweed and other beach items are often used to decorate the structure, but no dyes are allowed to color the sand.

“We’ve always attempted to keep it simple and more family oriented. Because of the popularity, we’ve had to limit it to 115 ‘estates’ on a first-come, first-served basis,” Starns said.