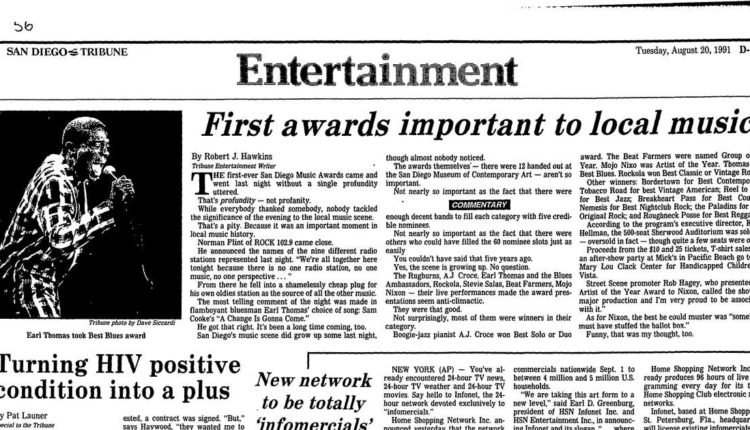 Thirty years ago Mojo Nixon was named Artist of the Year during the first-ever San Diego Music Awards held on Aug. 19, 1991 at Sherwood auditorium in La Jolla.

While everybody thanked somebody, nobody tackled the significance of the evening to the local music scene.

That’s a pity. Because it was an important moment in local music history.

He announced the names of the nine different radio stations represented last night. “We’re all together here tonight because there is no one radio station, no one music, no one perspective …”

From there he fell into a shamelessly cheap plug for his own oldies station as the source of all the other music.

The most telling comment of the night was made in flamboyant bluesman Earl Thomas’ choice of song: Sam Cooke’s “A Change Is Gonna Come.”

He got that right. It’s been a long time coming, too.

San Diego’s music scene did grow up some last night, though almost nobody noticed.

The awards themselves — there were 12 handed out at the San Diego Museum of Contemporary Art — aren’t so important.

Not nearly so important as the fact that there were enough decent bands to fill each category with five credible nominees.

Not nearly so important as the fact that there were others who could have filled the 60 nominee slots just as easily.

You couldn’t have said that five years ago.

Yes, the scene is growing up. No question.

They were that good.

Not surprisingly, most of them were winners in their category.

According to the program’s executive director, Kevin Hellman, the 500-seat Sherwood Auditorium was sold out — oversold in fact — though quite a few seats were open.

Proceeds from the $10 and 25 tickets, T-shirt sales and an after-show party at Mick’s in Pacific Beach go to the Mary Lou Clack Center for Handicapped Children in Vista.

Street Scene promoter Rob Hagey, who presented the Artist of the Year Award to Nixon, called the show “a major production and I’m very proud to be associated with it.”

As for Nixon, the best he could muster was “somebody must have stuffed the ballot box.”

Funny, that was my thought, too.

Man charged in grandma’s killing in Memphis is extradited from San Diego , where he was arrested while trying to steal yacht – KTLA