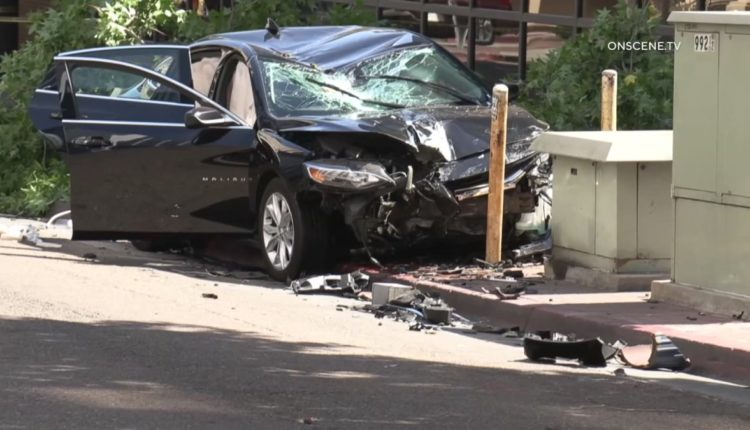 A little over two months after a tourist died following a road rage incident in downtown San Diego that took place in broad daylight, the man responsible for his death was taken into custody, according to San Diego police.

Bryon Lee, a 34-year-old former resident of San Diego, was located in Ontario, Calif., by law enforcement at a little after 11:30 a.m. on Thursday, investigators said, who added that Lee has been booked into San Diego County Jail on a murder charge. SDPD said that the Ontario Police Department and the United States
Marshals Fugitive Task Force assisted in the arrest.

A tourist was killed in a road rage incident Saturday, the latest in a series of road rage accidents, reports NBC 7’s Allison Ash.

The 33-year-old victim, Yacoub Abdallah of Midlothian, Illinois, was driving a black rental car in the Gaslamp Quarter at about 3 p.m. on June 26 when he had some sort of traffic incident involving another vehicle.

Brown said that the Abdallah’s girlfriend, who was in the car with him at the time of the incident, told detectives what happened.

During the investigation, officers determined the incident originally started a couple of blocks away over a traffic dispute. NBC 7’s Omari Fleming has more.

The two drivers were stopped at the light at 3rd Avenue and Market Street when Lee got out of his car and began punching Abdallah as he sat in the driver’s seat, police said in June. Abdallah got out, and the two fought, then they got back in their respective cars and took off in different directions.

Abdallah didn’t realize how badly injured he was until he lost consciousness near the intersection of First Avenue and Broadway, several blocks away, crashing into a pole, a tree and a utility box, according to investigators

Efforts to save the Abdallah’s life were unsuccessful. His girlfriend sustained minor injuries in the crash, as did a 14-year-old girl was walking nearby and was hit from flying debris

The apparent road-rage incident was just one of three in the San Diego area around the same time. In one, a driver had two bullets fired into his car as he drove on the I-15 as it transitioned to state Route 56 on Friday. The man was shaken up but not injured.  The CHP is still looking for the gunman, who sped off in a silver or gray van.

After learning about the incidents, some local drivers told NBC7 they’ve noticed a lot of angry, impatient people on the roads lately.

“People are just so short-tempered now,” said Valerie Hoffman, who lives in North Park. “ I mean, really, to shoot somebody because of some stupid thing that happened out on the road? Seriously, that’s terrible and frightening.”

Tashi Shertso is retired, so she doesn’t drive that much, but she told us there’s a lot of anger and frustration post-pandemic.

“The socialization skills haven’t kicked back in yet,” Shertso said. “We’re still getting used to being able to go out of the house without masks and socializing.  Hopefully, all those good manners will start coming back.”

Bella Vang said people need to realize that the road belongs to everyone. She tries to be patient with other drivers by getting out of the way when they become aggressive.

“We just have to be aware of our surroundings whenever we go anywhere now,” Vang said. “It’s kind of unfortunate.”