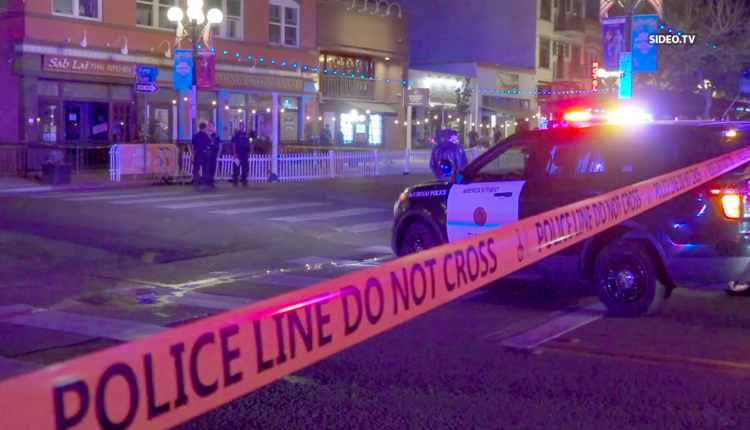 SAN DIEGO — Homicide detectives are investigating a shooting that left one person dead in the Gaslamp Quarter early Monday.

San Diego police were called to Fifth Avenue and Island Avenue before 2 a.m. for reports of multiple gunshots. Video from Sideo.TV showed a crowd of people in front of Blarney Stone Pub, where someone was down in the doorway.

Austin Arroyo, a military member who was enjoying a night out in Gaslamp, said he was a street away when he heard the gunfire.

“We were just walking south on Fifth Ave. when we heard gunshots,” Arroyo said. “I heard four gunshots. Everybody started running. I saw a guy fall on the ground. I started running towards him.”

Arroyo, tapping into some medical training he got from the U.S. Navy, began to try to help the victim. He said the man had at least two bullet wounds, possibly three.

Arroyo said they began compressions and other life-saving efforts until paramedics got there. One person was taken to UC San Diego Health, where they died, according to SDPD.

No other details about the victim or possible shooter have been released.

Police said a second shooting was reported near the intersection of Seventh Avenue and Market Street around 10 minutes before the other shooting. Officers in the area heard gunshots and pursued a car a short distance before the driver pulled over, SDPD told City News Service.

No one was hit by gunfire in that shooting, and a man and a woman were taken into custody. Details about the pair and possible charges they face were not immediately available.

Watch the FOX 5 Morning News and check back for updates on this developing story.