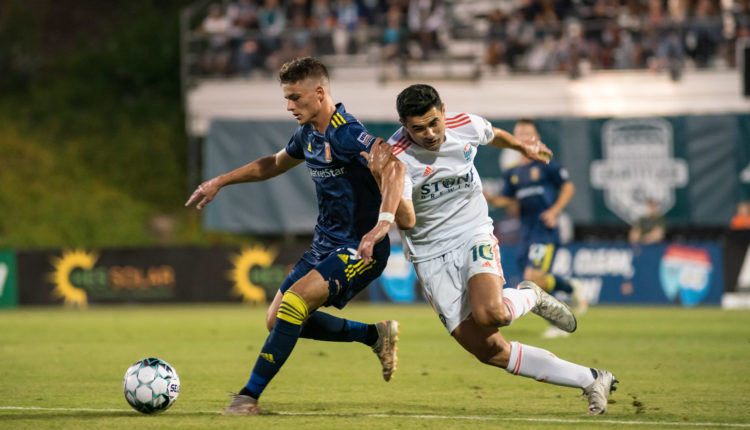 Douglas Martínez scored 42 seconds into the match, the fastest goal in Monarchs history, besting Chandler Hoffman’s record of 54 seconds against Orange County SC in 2017. The lone breakthrough earned the club its first road win of the season.

The Monarchs got out to a perfect start with a goal in the first minute of the match. Milan Iloski and Charlie Wehan combined on the early counter to find Martínez inside the box where the forward smashed the ball inside the right post on his first touch. San Diego settled the match and created several chances of their own throughout the half, but the Monarchs defense denied all attempts and the traveling side entered the halftime break with a 1-0 advantage.

In the 57th minute, Wehan and Martínez combined on the counter once again for the Monarchs, but Martínez’s chance at a brace was saved by the goalkeeper to keep Loyal SC within striking distance. San Diego appeared to equalize in the 86th minute on a tap-in goal from Corey Hertzog, but the offside flag was raised. Immediately following the offside the Monarchs looked likely to double the lead, but Martínez’s shot ricocheted off the post, Aris Briggs collected the rebound, but his shot was saved. San Diego pushed for a goal in the final moments, but the Monarchs defense held on to preserve the clean sheet for the visitors.

UP NEXT: The Monarchs travel to Texas to take on San Antonio FC at Toyota Field on Saturday, August 21 at 6:30 p.m. MT. The match can be streamed on ESPN+.

– Usual defender Bret Halsey played in the midfield for the Monarchs in the match, with Bode Davis sliding back in the formation and onto the right side of the back line.

– Forward Charlie Wehan recorded his first professional assist on the Douglas Martínez goal in the first minute of the match.