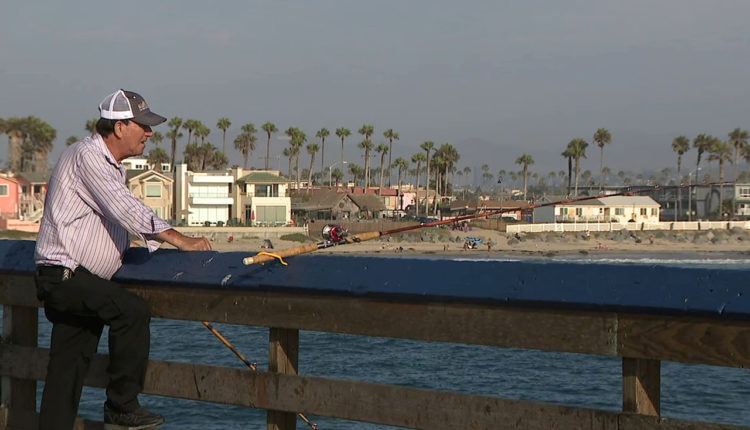 IMPERIAL BEACH, Calif. – Fishermen are growing increasingly frustrated with restrictions on the Imperial Beach Pier, which only allows them to fish in a designated area.

Currently, the pier is about 1,500 feet long and fishing access is limited to less than half of that.

“It’s elbow to elbow where we have to really practice line etiquette and make sure you’re not getting tangled,” said Kevin Rasmussen, an avid fisherman.

The issue comes with the access provided to surfers and swimmers, both allowed within 20 feet of the pier. It means anglers are forced to move hundreds of feet up the pier, cutting off access to larger fish near the shore.

“I’ve never seen a pier that allows a swimmer or a surfer within 20 feet of a pier,” said Nick Cline, another avid fisherman.

Since the outbreak of the pandemic, the Tin Fish restaurant at the end of the pier was allowed to place dining tables along the edge, further blocking access for fishermen and women.

“In the very back of the pier you’ve got thresher sharks that come through,” Rasmussen said. “There’s yellow tail; there’s sculpin down low. There’s just different species that are available in these areas that they’ve restricted us from.”

Trish Baglioni, the manager at Tin Fish, said the divide has caused some tension, but they’re merely looking for everyone to get along.

“That’s really all we want,” Baglioni said. “That’s the only thing we need out here is just if something is allowed to just abide by what’s being allowed.”

After hearing the fishermen’s concerns, Councilmember Jack Fisher said the council could take the issue up soon looking at possibly extending the surf zone to 150 feet from the pier.

“Its really important to me that we come to an agreement of what gets done,” Fisher said.

But while debate continues, there’s a chance the fishing space could become even smaller if a proposal by the Port of San Diego becomes reality, which gives more pier to leisure.

“The average fish size on that slope is about four inches in length and families are trying to feed their families on that,” Cline said.